Back in 2019 I had visited the Universal Studios Orlando parks around Easter Weekend and noticed that some of the penny machines had stickers on them notating that some of the designs would be retiring.  You can read about that here to catch up.  Then I waited patiently and checked back at the parks about every two weeks waiting for these new designs to appear and it did take a long time.  The last few final pennies didn’t show up until earlier this year, and I’m finally able to share them all with you. 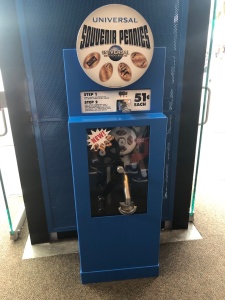 First up was a machine that used to be found out in one of the parking structures and had the Fantastic Four as designs on the pennies.  Those have been retired and now this machine was relocated to the Universal Store in CityWalk.

I really like this set with some fun designs.  They include a class King Kong, and E.T. images, plus a new Jaws designs, and my favorite is the Back to the Future penny with Doc Brown’s DeLorean License plate “Outatime”.

This store has 4 machines in total available, but only one of them had received new penny designs. 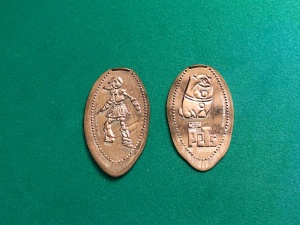 With this machine, not all of the designs were replaced.  The Kong design stayed which I thought was a bit strange.  The two new designs are of Astrid from How to Train Your Dragon and Mel from the Secret Life of Pets.

Next, we walked over to the San Francisco area of the park and into the Candy Factory.

This machine always had a fun cabinet and fit in nicely with the “Factory” design inside.

I was pleasantly surprised to find another Back to the Future design here with Marty and Doc together, then there was Max from the Secret Life of Pets, and my Daughters’s favorite Princess Poppy from the Trolls movie (she had me press a few extras for her own collection).

That wrapped up the designs at Universal Studios, although I will note that with the closure of the T2 3D Stunt show and the soon to open Bourne Spectacular set to replace it.  In the gift shop for that attraction, the penny machine was recently removed so I’m crossing my fingers that a new one will return.  Maybe with some Jason Bourne designs.

With Universal Studios done we headed over to the other park Islands of Adventure for quite a few changes.  The first was in the Island Market & Export store.

Initially, this machine had a sticker on it stating all three designs were to be retired, but then the sticker was eventually removed with no changes.  As you can see above the designs have been kept the same.  Guess they changed their mind.

The next location was over in Seuss Landing at the Cats, Hats and Things gift shop.

Ok, so this one was a bit strange.  The sticker that was on this machine showed the design on the left side of the marquee with the Cat and the Hat with his fingers intertwined was to be retired.  But you can see above that was not the case, instead, the design on the right of the Cat and the Hat full-body design was removed from this machine and relocated to the Gertrude McFuzz store (see below for that machine). 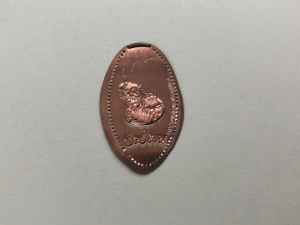 This machine did receive a new design of Fish in his Bowl. 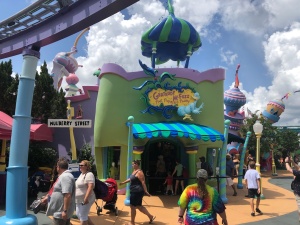 Now we will skip over to the Gertrude McFuzz store and go over the rest of this Dr. Seuess design changes.

When this machine was updated it was around the Holiday season and this area of the store is used for the Grinch meet and greets so it does get a bit busy and hard to access during that time. 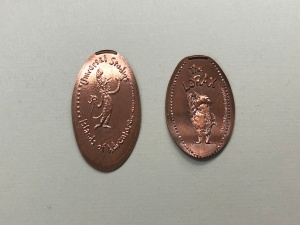 Above is a picture of the two “new” designs at this machine.  The one on the left is just “new to this machine” and was originally in the Cats, Hats and Things store.  The penny on the right of The Lorax is brand new. 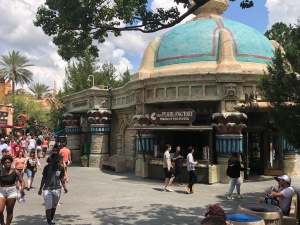 Passing through Seuss Landing you arrive in The Lost Continent.  There is a store near the Mythos restaurant called Treasures of Poseidon.

Unfortunately, the machine that was here just inside the doors was completely removed, but…

Shortly after that machine was removed and failed to return I did find a new machine over in the Jurassic Park Discovery Center.  You can read more about it here.

The machine cabinet is different but I had a feeling this may have been the same machine just redesigned for this location.

Continuing through the Jurassic Park area the next set of new pennies was in the Jurassic Outfitters store.  You just need to walk all the way into the back near where the Jurassic Park River Adventure boat ride lets out.  It’s easy to find, just follow all the soaking wet people. 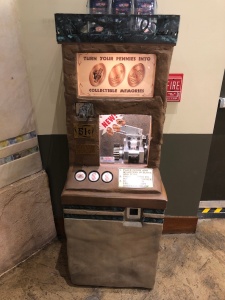 This is another cool cabinet design.  I like how it appears to be carved out of stone which is perfect for the Jurassic themed store.

The new designs here are themed around Jurassic World and include the Movie Logo, Blue the Raptor and the Indominus Rex. 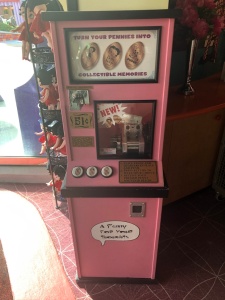 The last few machines are over in Toono Lagoon.  First, we headed into the Betty Boop store. 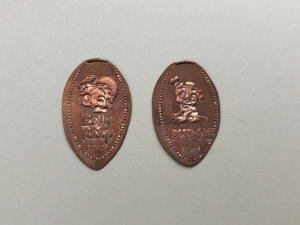 I’ve had a love/hate relationship with this machine.  I had visited here years ago and the machine broke after I rolled two of the three designs.  Then I made a special trip back a couple years later to get the missing design and the machine was broken.  I eventually found the missing penny on eBay to complete my collection and thankfully haven’t had to use this machine since.  But that all changed when these new designs were released.  Thankfully the machine worked perfectly and I got my new coins without any issue.  The new designs are of Betty winking, and her dog Pudgy. 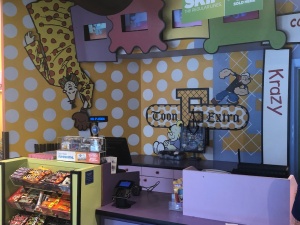 Across the walkway is the Toon Extra gift shop.  They have lots of Scooby-Doo, Betty Boop, and Popeye merchandise in here along with other cartoon favorites. 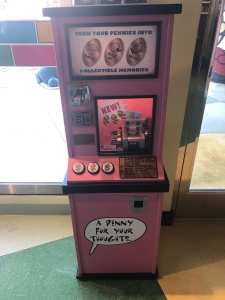 I thought he speech bubble on this machine was fun.  “A Penny for your Thoughts.”

All three designs in this machine were replaced.  They are all themed around Popeye and include the Spinach eating man himself, Olive Oyl, and Bluto.

That completed all the new pennies released in Universal Orlando.  In total 20 new pennies were made available and I think most of them were fun new additions.  It is nice to see some of the new Dreamworks animated movie characters getting coins, plus some of the classic franchises like Back to the Future.  Universal does not usually change out their designs as frequently as Disney so this may be it for a while.  But I’ll be sure to visit when I can for any new machines or designs.  Hopefully, they continue with those stickers on the machines, which makes it much easier to know which designs retiring.