A few years ago we took a penny pressing trip down the Disney Springs Hotel Plaza Boulevard visiting what they called the “Good Neighbor” hotels.  These are hotels that are not owned or run by Disney, but due to a special agreement those guests are allowed some of the special perks set aside for Disney resort guests.  In years past these hotels did not have a pressed penny machines, then what seems like all at once each of them received their own machine with Disney themed designs which you can read about here.

Then not too long ago some of these machines started disappearing during the Covid shutdown and at one point only one machine was still available at the Wyndham Hotel.  Some fellow collectors had reached out asking for an update on the machines down this boulevard so I took a day to do some exploring.

As with most of the Disney resorts they don’t allow parking at the hotels is you are not a guest, or if they do have public parking there would be a fee which I wanted to avoid.  So I parked for free at Disney Springs and then walked over the sky bridges towards the Good Neighbor resort area.

I certainly got my steps in on this day as it’s quite a walk up and down the boulevard, but as had been reported most of the penny machines had been removed.  That was except for at the Wyndham hotel. 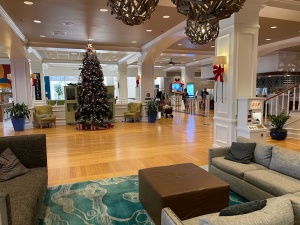 As I headed inside this hotel I found the machine almost immediately as it was just in the middle of the main lobby.  On my previous visit to find this machine it was in the gift shop which you can read about here.

The penny designs were unchanged, but the cabinet of the machine had been repaired to a nice new coat of white paint.  Previously this has been painted red.  I will say it does seem to match better with where it’s located now in the lobby.  The Disney gift shop was closed and all markings were removed.  From information I found online Disney has decided to close all of their off-site gift shops in these good neighbor hotels.

Usually I would have just left after seeing this machine in the main lobby, but our friends over at Presscoins.com had posted that a second machine was here but in a location that was not so obvious.  Just past the check-in area were the elevators. 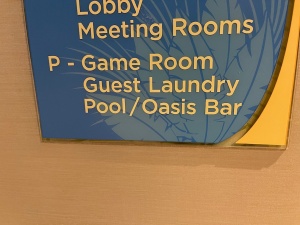 To find this second machine you need to take the elevator down to level “P” towards the pool. 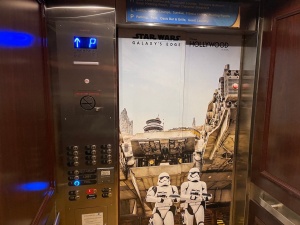 Once inside the elevators, as the doors close there is a cool image of Galaxy’s Edge from Hollywood Studios.    I love that area of the park so this was a fun little piece of advertising.

When the elevator lets you on level “P” there is a long hallway that will take you towards the pool and the penny machine along the wall.

There is not much else down here, so it’s definitely a hidden location for a penny machine meant to attract guests.

Similar to the machine up in the main lobby, it has received a new coat of just plain white paint but I think it works in this area.

This machine and the designs were previously located in the Holiday Inn Orlando hotel also on the Disney Springs Resort Plaza Boulevard.  The designs are unchanged, but it’s nice to see that they were relocated so guests can still press them.

I do hope to find that the other machines that were removed from these hotels are just relocated at some time in the future.  I also feel that the placement of this machine is a bit strange, but I guess maybe they don’t anticipate many outside visitors coming to the hotel just to press some pennies (am I the only one?).  If you are staying at this hotel I’m sure you would visit the pool at some point and would pass by the machine so you would know about it.  Hopefully this will help you find the machine should you want to press a set for yourself.

Thanks for checking in this week, stay safe and Keep on Pressing!