When I had originally heard about this machine being released it seems a bit strange.  I’m all for getting new pressed penny machines but the designs on this one were from a movie released back in 2015.  Why were new designs just being released now?  Well, spoiler I don’t have any idea and no one seems to know.  I guess we should just be happy they arrived at all.

To investigate I headed over to Epcot on the weekend to find the machine and see what else was new. 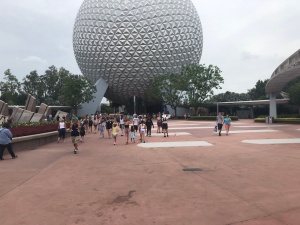 One thing that I found was new was at the front of the park the Leave a Legacy monuments were removed from the right side.  For those that may not know, back in 1995-96 the park offered you the chance to Leave a Legacy which was basically a picture of yourself engraved on a metal sheet with thousands of other people.  They placed these images on large marble monuments that were located on the left and right sides as you enter the park heading towards Spaceship Earth.  I will admit I was one of the people that bought a location and my picture is currently still up there somewhere.  Their removal is the beginning of the Epcot transformation that will be taking place over the next few years that includes new attractions, restaurants, maybe a new world pavilion and plenty more things they have yet to announce.  I will admit that with these monuments gone the front of the park is much more wide open and easier to walk through. 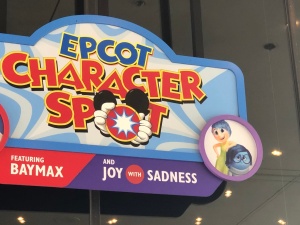 First, we decided to meet some characters and my daughters latest favorites are Joy and Sadness from Inside Out which works perfectly for this post. 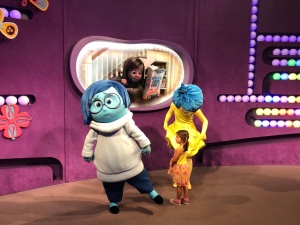 The characters are very cute and do a great job with the kids and adults too.  They always make for a fun photo op. 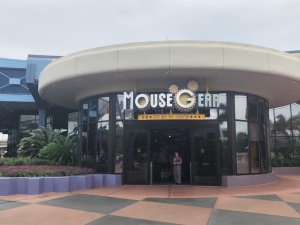 After that, it was time to get down to business.  We headed across future world and into the main gift shop called Mouse Gear.

I tried to find some Inside Out merchandise but there really wasn’t much available.  I asked a few cast members and was pointed towards only a small area with some Joy and Anger plush dolls. 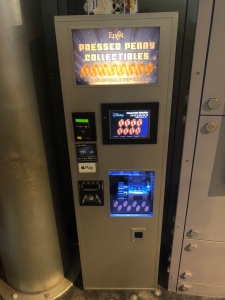 We continued to walk around the store looking for the new penny machine I had heard about and found it located around the middle of the store near the dressing rooms.

The machine is an 8-design touch screen model that supplies pre-loaded zinc pennies. 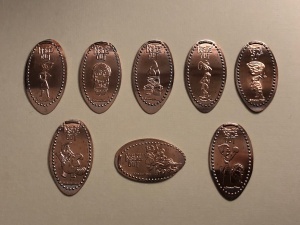 I will admit this is a really cute set of pennies.  The images include Joy, Sadness, Anger, Disgust, Fear, Bing Bong and then a few more with various characters together.  Even though this is an “older” movie it’s definitely popular.  There were quite a few people ahead of me and then waiting behind me for this machine.

Before we left I did see some “Farewell to Illuminations” merchandise around the check out areas.  Illuminations is the long-running nighttime fireworks show that happens at Epcot every night.  Disney announced they are retiring it and will be replaced with an all-new show.  Disney fans are obsessed with this type of merch and buy it up as quickly as it’s released.

I do still find it a little interesting that they decided to release some pennies for a movie that came out a few years ago, but people really like it so that’s probably a good move on their end.  Hopefully, this is the start of a new series where they release more machines with designs themed around older movies.  I’m still holding out hope that someday I can get some Robin Hood pennies, which is one of my favorite Disney animated movies.

In Epcot’s world showcase one of the more popular pavilions is Mexico.  Whether this is due to the tequila bar La Cava, Mexican food which I personally enjoy, or if like my daughters it’s the slow-moving boat ride attraction.

When the pavilion initially opened the boat ride was called El Rio del Tiempo (The River of Time), and took visitors through various scenes in Mexican history. 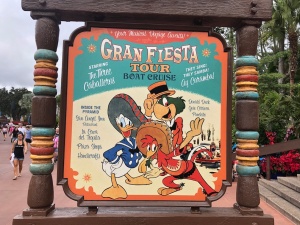 Then in 2007 the attraction was changed to the Grand First Tour featuring The Three Caballeros.  For those of you that may not have seen the 1944 Disney animated movie the Three Caballeros are Donald Duck, Jose Carioca, and Panchito Pistoles.  It’s still a slow-moving boat ride, but the Three Caballeros are supposed to perform a concert but Donald is off on his own exploring Mexico.  It’s a cute little ride and my kids absolutely love it.  On most visits to Epcot we hop on at least 2 or 3 times.  But we will get back to the ride shortly. 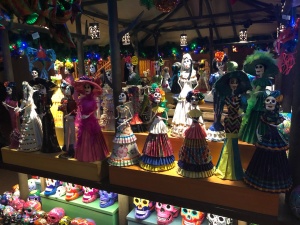 The part I always loved about this pavilion is how you are inside, but it’s designed to look like you are outside in a Mexican market.  There are building exteriors around the perimeter of the pavilion, and various carts selling all sorts of beautiful art, as well as t-shirts, sombrero and plenty of Disney merchandise.

I brought up about the change to the boat ride in 2007 for a reason.  With the popularity of the 2017 Pixar animated movie Coco, there have been rumors swirling around that the Grand Fiesta tour ride would be changed / updated to revolve around the Coco story and characters.  So far nothing has been confirmed by Disney, but maybe one step in that direction has to do with a new pressed penny machine that was just released inside the Pavilion.

Located outside La Tienda Encantada store (also by the exit to the boat ride) is where there used to be a 3-design penny machine.  That was removed and replaced with a new 8-design touch screen machine.

The designs on these new pennies are all characters from the Coco movie. 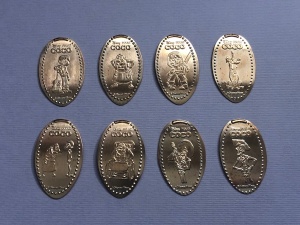 The images include Miguel with his Guitar, Ernesto del La Cruz, Hector, Abuelita, Mama Coco, Dante the Dog, Abuelita pinching Miguel’s cheeks, and Miguel sitting with his face painted.  The details on these coins are really nice and made me want to watch the movie again.  These characters were really great and the story in the movie is fantastic.

I mentioned that there used to be 3-design penny machine here that initially I thought had been removed completely.  However after we wandered around the pavilion a bit and contemplated eating at the San Angel Inn we found the machine.

It’s now located just outside restaurant near the check-in area.

The designs have not changed, but it’s nice to still have this machine available.

I guess only time will tell on whether we will get an updated Coco boat ride inside the Pavilion.  But until then this is still a fun place to visit and just spend some time checking out all the details.  Plus there’s free air conditioning inside which is a blessing in the middle of the Florida summer.