It’s that time of year again for the Major League Baseball (MLB) All-Star Game.  This year marked the 90th All-Star Game and was hosted by the Cleveland Indians.

The game was played on July 9th, 2019 and (SPOILER) the American league won 4-3.  As with previous years, there were some special pressed penny designs issued for the game.

There were six pennies in total which is similar to other years.  The designs included the 2019 All-Star Game Logo, the Host City, and some other really nice images.

This was the 6th time the All-Star Game was hosted by Cleveland and the first since 1997.  This also established Cleveland as the team to host the most All-Star games, breaking a previous four-way tie with the Pittsburgh Pirates, St. Louis Cardinals, and Cinncinati Red all having hosted 5 games. 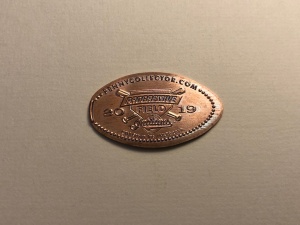 The game was played at the Indian’s home Progressive Field.  The ballpark originally opened in 1994 as Jacobs Field and held that name until 2007 when it was renamed after the Progressive Company paid for the naming rights. 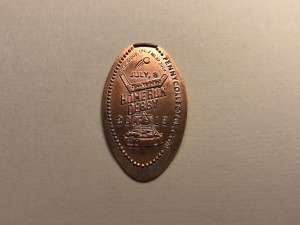 The above design was made for the Home Run Derby which is one of my favorite parts of the All-Star week.  This year’s winner was Pete Alonso of the New York Mets.

This is always a fun set of pennies I look forward to being released each year.  I wish I could say that I was able to press these in person but I’m not lucky enough to be able to attend every All-Star Game.  Thankfully the CTMGroup (Pennymen) press some extra sets and offer them for sale on their website.  If you are interested to be sure and head over there quickly before they sell out.  Now I just need to wait until next year.

As a baseball fan few it’s always entertaining to watch the Midsummer Classic also known as the All-Star Game.  It probably goes back to when I was a kid and would make up my own All-Star Rosters featuring my favorite players at the time and even squeezing myself into the lineup hoping it may just one day come true.  Well here I am all grown up and unfortunately never made it on the field or even in the crowd to see an All-Star game but that doesn’t stop me from watching everything from the Home Run Derby to the actual game I can’t get enough of it.

This year the game was being hosted by the city of Cincinnati, Ohio at the Great American Ball Park which is the home to the Cincinnati Reds.

I’m sure by now all the fans have been the final outcome but just in case I’m not going to review the game or the final score.  But I did want to show off some special pressed pennies that were made available by the great team over at pennycollector.com.  The the last few years they have made special machines available just for the All-Star game and the Fan Fest that takes place leading up to the game.  I have tried to collect them all and have a pretty complete set but am missing a few years.  This year they actually offered on their website some additional designs that were not available in Cincinnati.  As soon as I saw this I had to place and order.

There are 3 designs available: All-Star Game July 14 2015, Fan Fest July 10-14 2015, and Great American Ball Park Cincinnati Ohio.  The designs were all pressed on copper pennies which is always a plus when you can get them.  The special offer included in additional to the pennies their new 2015 Baseball Booklet.

I don’t personally use these booklets to store my pressed coins but I still like collecting the booklets separately and always enjoy seeing the new ones each year.  If you haven’t checked out pennycollector.com please do so.  They have a lot of great tips, a huge catalog of all available penny machines around the world, and an online store with a lot of unique coins and even some retired designs no longer available.

For anyone that loves baseball this is really a nice little set.  With new designs available each year (and hopefully many more years to come) there is always something to look forward to in addition to watching the worlds best ball players all together in one place.  If only they had pressed pennies in the Cracker Jack boxes I’d be all set.