I’m sure all of us at some point in our lives have watched a Television Game Show.  Whether it’s a classic like Family Feud, Hollywood Squares, Password, What’s My Line or maybe it’s something newer like Who wants to be a Millionaire.  Most of these have had hosts with personalities almost as big as the shows like Monty Hall, Richard Dawson or Bob Barker.  But one is so synonymous with a show that all I need to say is Jeopardy and you would immediately think of Alex Trebek.

Alex was born on July 22, 1940 in Sudbury Ontario Canada.  He began his career in 1961 working for the Canadian Broadcasting Corporation (CBC) reading national news and covering a range of special events for CBC Radio and Television.  His first hosting job was on a Canadian music program called Music Hop in 1963 followed by numerous other shows through the remainder of the 60s and early 70s.  Then in 1973 he moved to the United States to work for NBC to host a new game show called The Wizard of Odds.  This led to other game show hosting duties until he was tapped to film a pilot of a revived version of Jeopard in 1984 when original host Art Fleming declined to return.

The show was picked up and Trebek remained the host for 37 years, and filmed over 8,200 episodes. He received seven Daytime Emmy Awards for Outstanding Game Show Host among many other accolades.

On March 9th, 2019 announced he had been diagnosed with Stage IV pancreatic cancer which would eventually take his life on November 8th, 2020.  Even though his treatments he continued to film new episodes of Jeopardy and taped his last episode on October 29th, 2020 just 10 days before his death.  This final episode eventually aired on Television January 8th, 2021 with a wonderful tribute at the end allowing his fans an opportunity to say goodbye.

As a tribute to Alex Trebek, the wonderful people over at The Penny Depot created this special pressed penny with Alex’s face, and signature.  He will be missed, and I don’t think Jeopardy will ever be the same without him.

As Alex Trebek used as his trademark sign off.  “So long, everybody!”

I’m not sure if my curiosity with the British Monarchy is due to my Canadian background, being born and living there for 18 years.  Or maybe I’ve just been watching too much Game of Thrones.  Whatever the reason I had a bit of Royal Wedding fever, and along with millions of other viewers I got up early Saturday morning and watched the extravagant event.

A week or so before the wedding I had seen online that over in Epcot the United Kingdom Pavilion was going to have some Royal Wedding gifts and souvenirs.

This area of the park is one that I don’t spend a whole lot of time in, which is really a shame because it’s a beautiful area.  The buildings look like they are straight out of Downton Abbey, and the British accents from the Cast Members always seems so friendly. 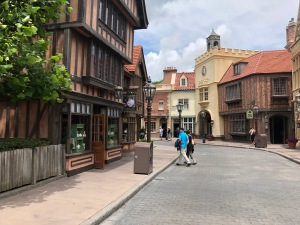 In the store called The Queen’s Table is where the special souvenirs were supposed to be found.  However I was apparently a few days too late.  Upon my arrival I walked through all the stores but couldn’t find anything.  Eventually I asked a Cast Member and was told that everything they had was sold out and they were not anticipating any more stock. 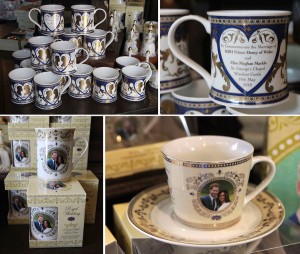 The above and below are pictures of some of the items that were available in the Epcot store.  I don’t know if I actually would have bought any of these items, but I was still a little disappointed that everything was gone.

There was one other thing I wanted to check out before I left Epcot.  In the UK Pavilion there is a pressed penny machine.  I was pretty sure they would not have changed the designs but wanted to make sure.  As I had suspected the images were unchanged, but that would have been a really cool special penny to have available.  Eventually I headed home empty-handed, but that was about to change once I got home.

It wasn’t long after I got home when my phone buzzed that I had an email.  It was a promotional email from Pennycollector.com that they were offering special pressed coins commemorating the Royal Wedding.  I quickly hopped online and placed my order. 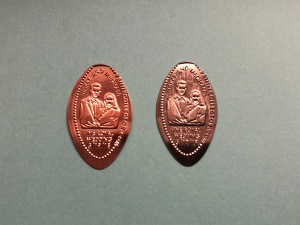 A week or so later my package arrived in the mail with the above two coins.  The design is really nice and quite detailed.  The design is the same on both coins, just one pressed on a zinc and the other silver.  Unfortunately these were the only two options (no copper option) but they still made a nice addition to my collection.

A couple of weeks ago my wife and I went to my cousin’s wedding near Niagara Falls Canada.  We had visited Niagara Falls a few times but always during the warmer time of year.  This was the first time we were going to adventure there in the middle of January.  I’m originally from Canada but have been located in the states long enough to have forgotten how brutal winters can get up there.

When we left Orlando it was about 60 degree, but we were headed to Buffalo Airport which ended up being around 4 degrees and quite a bit of snow.  We got our rental car and headed towards the border. 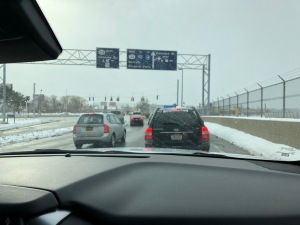 The temperature seemed to get colder as we got further into Canada.  The roads weren’t too bad, but the wind just cut right through whatever clothing you had on.  After about an hour and a half we were near St. Catharine’s Ontario which is where the wedding was going to be.  On the first day we were invited to the rehearsal dinner which wasn’t until later on in the day.  So I took the opportunity to try and find a penny machine. 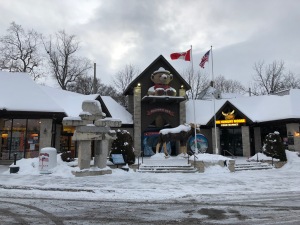 Just on the out skirts of Niagara Falls I found a place called Souvenir City.  This is basically the biggest gift shop I’ve seen with all stuff Canada and of course the Falls. 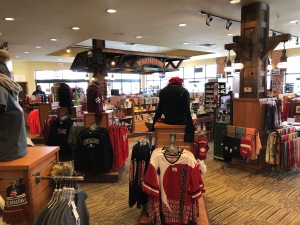 If you like maple syrup they have a whole wall of it and things made from it.  There is also a lot of Ice Wine products (yum!), T-shirts, sweaters, stuff animals and more.

In the middle of the store right near the check out area is a “Penny Crusher” machine.  This was a little unique as it had a bright road light running inside the machine flashing different colors while you use the machine.  It was a little distracting up close, but from a distance looked kind of cool.

Now please note, that this machine cost $1 Canadian which if you are not familiar is a coin called  Looney (there is a Loon design on the coin), and you then supply your own penny.  However you are NOT to use a Canadian penny as it’s against the law.  Also on a side note Canada has stopped created pennies so most stores don’t even have them to give out.  So make sure to bring some of your own American pennies for pressing. 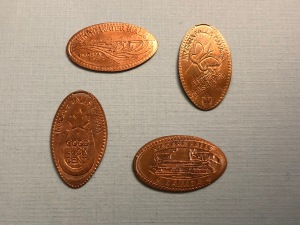 The designs at this machine are of attractions all around the Falls.  The White Water Walk, the Butterfly Conservatory, Maid of the Mist, and a Good Luck Center with horseshoe and maple leaf.  By the time we were done picking up some gifts we headed back to our hotel and had a great time at the rehearsal dinner catching up with our family.  The next day we got up early, had a quick breakfast and decided to try and check out Niagara Falls before the wedding later that afternoon. 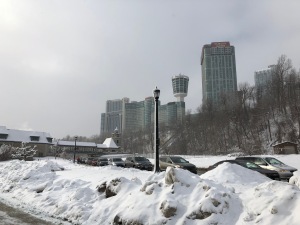 Not many people were out on this cold morning which made visiting the falls kind of enjoyable.  We parked near the side of the street and just ran over to see the falls partially frozen.

Seeing the river frozen, and the ice forming along the sides of the falls was really unique and something we had never seen in person before.  After we were pretty frozen through we got back in the car and had time for one quick stop.

Near the falls is a Great Wolf Lodge resort.  A few years ago I had visited one of these near the Poconos in Pennsylvania and was blown away at how cool it was.  This location was no different and fully themed.

There are animatronic characters all over the place, and of course these resorts are known for their indoor water parks.  Even thought it was freezing outside the water park did look pretty enticing.

Just outside the gift shop in the main lobby of the resort was a penny machine.  This one also took $1 Canadian coins, and right beside it was a change machine if you needed help getting Canadian money for the machine. 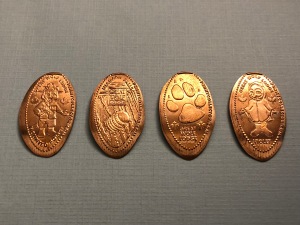 These pennies were designed around the Lodge and the falls.  The images included a Wolf dressed like a Mountie, a Barrel going over the falls, a Paw Print, and Violet one of the Lodge characters.  This happens a lot when I’m on a roll (ha) pressed coins, and was running out of time.  We quickly (but carefully on the ice) got back to our hotel, changed and made it to the wedding ceremony with just a few minutes to spare.

The wedding was wonderful and the reception was a lot of fun.  By the end of the day we were pretty tired and had to get an early start the next day.  Up early we said goodbye to our family staying in the same hotel, and made our way back to the US Boarder.

Eventually we were back in Buffalo and got to the airport in plenty of time for our flight.  But this is where our adventure home really got crazy.  Because of the bad weather in Buffalo our flight was canceled and another wasn’t available for 3 days.  We decided to drive to New Jersey and stay with my sister until we could get a different flight out of Philadelphia the following day.  It took a little longer than anticipated but we finally got back home to Florida and were happy to see the sun and warmer weather.

Our trip was definitely a unique adventure but it was nice to see the falls in the winter, collect some new pressed pennies and of course visit with family.