For our 5th wedding anniversary my wife and I decided it was time to take our long overdue honeymoon.  When we first got married we had a lot going on in our lives and just figured we would take our honeymoon when things slowed down and before we knew it 5 years had passed.  So this was the year we were going to change that and decided to take a cruise to the Bahamas.  Of course being the Disney fans that we are the Disney Cruise Line seemed right up our alley, except we were leaving our girls behind to stay with grandparents (gasp!).  We missed our girls every day, but the quite and slow pace of our long weekend trip was just what we needed to relax and just recharge.

We were scheduled to check-in at 10:30 am so we got up early and headed over to Port Canaveral in plenty of time.  This was our first cruise so we weren’t sure exactly what we were doing but Disney made it very simple.  We parked in the garage right across from the terminal and as we walked over towards the security area our ship was in the distance waiting for us. 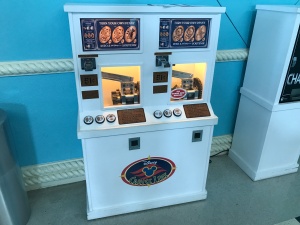 After checking in and getting our boarding group number we sat in the waiting area of the terminal.  Over to the far side of the check-in desks was something I kind of thought I may never actually get to see or use in person.  They have two pressed penny machines here with Disney Cruise Line designs on them.  However, these machines can only be accessed by passengers on the ship.  If you are just passing through there is no way you can get to these machines.  I first found out about these machines months ago and have been scouring online sources trying to acquire a set but to no avail.  But now I was going to be able to use them in person and add some hard to get coins to my collection.

The first machine situated on the left side had designs of the Disney Dream, Disney Fantasy and Disney Cruise Line with Mickey.  Our cruise ship for the weekend was the Disney Dream so it was cool that they have coin designs specifically for each ship in the fleet.

The machine on the right side also had three designs including the other two ships: the Disney Wonder, Disney Magic, and Disney’s Castaway Cay (pronounced Key) which is Disney’s private island in the Bahamas. 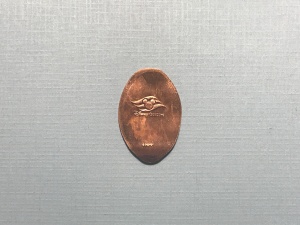 Each of the pressed pennies have a backstamp on them of the Disney Cruise Lines logo.  This was a nice touch as most of the pressed coins in Florida don’t have backstamps which are almost the norm out in California.  With these special pennies pressed and safely stored away our boarding group was called shortly after. 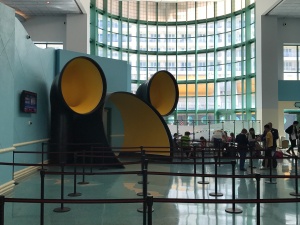 You get to walk through this cool “hidden mickey” although it’s not really all that hidden.  Next you get your picture taken, before the staff on board ask for your family name and announce you onto to the ship.

Above is a picture of the main atrium that you walk into, I took this from one of the higher decks to get a better shot of the chandelier and entry way.  Your cabin’s aren’t ready until later in the afternoon and there is a fun Sail Away party up on the main deck where all your favorite Disney characters help celebrate the beginning of the cruise.

There are constantly things to do on board, and the food is pretty much always available.  We spent the first evening exploring the ship and my wife took full advantage of the Spa.

We had a stateroom on the seventh deck with a balcony that made for some really amazing mornings.  Watching the sun rise and even peek through the clouds like the above picture were very magical.  It was really nice to sit out an enjoy the crashing waves, with a coffee in hand and sea air all around you.  If you look closely in the distance you can even see another cruise ship.  On Saturday morning we decided to check out the Enchanted Garden restaurant for breakfast. 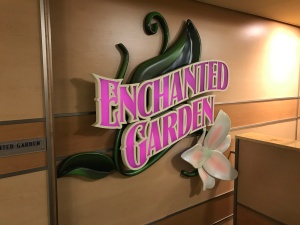 The Disney cruise lines have what they call rotational dining so your evening dinner location changes each night.  The rotation is listed on your room card, and we were scheduled to eat here for dinner but opted for a different kind of buy-up option that I’ll go over in a bit.  So we figured since we would miss this place for dinner why not go inside for breakfast.

Inside it’s themed like an English Garden which also kind of reminded me of the Crystal Palace in the Magic Kingdom theme park.  For breakfast they had a huge buffet with all types of your usual offerings, including fresh fruit, pastries, breads, meats, and of course eggs, bacon, etc.  Since most people seemed to be leaving early to explore our first port of call this place was pretty calm and very little lines for the food which was nice. 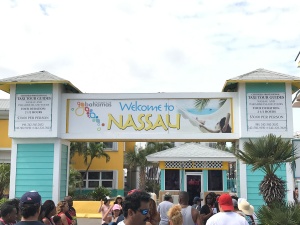 Our first port of call was Nassau in the Bahama’s.  We eventually headed off the ship for a bit to walk around.  I didn’t have an excursion planned so instead we just walked around and did a bit of shopping.

The locals were very nice, but can be a bit over bearing.  You are constantly being called after to come and buy things they are selling or trying to get you into their cab for a tour of the island.  It was never overly aggressive but can get a little uncomfortable if you aren’t used to that.  We go through the main area by the dock and headed a few blocks inland towards the main street and there were a lot of standard tourist shops to check out.  After a couple of hours we decided to get back on the ship and lay out in the sun for a bit.  This was a vacation after all we couldn’t come back from the Bahama’s without a tan. 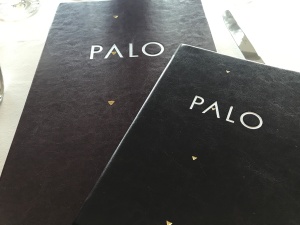 The ship does have two adults only restaurants that you can make reservations for.  I booked the reservations a few months ago to ensure we could get a table, but it did seem like you could still make late minute reservations on board if needed.  As I mentioned these restaurants are not completely covered by your usual cruise cost.  There is an up charge but is pretty reasonable for what you get.  One of the restaurants is called Remy’s which is based on the Pixar movie Ratatouille and is obviously French inspired.  We decided to try the other restaurant called Palo which is an Italian inspired dining experience. 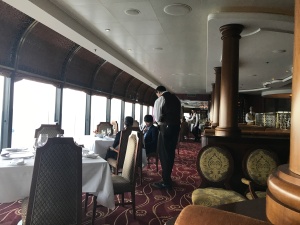 There was a dress code for this restaurant.  It wasn’t too outrageous in requiring a tuxedo or anything.  But there was no swim wear and for men they requested either a suite, or dress pants and shirt.  For the ladies a dress or pant suit was acceptable.  The inside was beautiful and we were informed by our hostess that the interior was actually designed as if you were in Venice Italy.  I’ve never been to Venice so I’ll take their word for it, but it was really an exceptional place to have a meal.

During the initial booking of the cruise I mentioned that we were celebrating our wedding anniversary which definitely worked out in our favor.  The hostess seated us at a nice private table away from the other tables with a beautiful view of the ocean as the ship made its way to our next port.  When the menu came it was explained to us that the Palo experience can take about 1 1/2 to 2 hours.  We were in no rush so this was fine with us.  They do offer a chef selection menu where you get five courses picked by the chef and matched with accompanying wines.  Or you can do the a la carte menu which is what we opted for.  Your first course is an antipasto which is created table side from a huge cart with a wide assortment of cured meats, cheese, roasted veggies and olive oils.  Next was our appetizers which my wife selected a potato gnocchi, and I went for the fried calamari and shrimp were was all really fresh, tender and fantastic.  There was then an intermezzo of lime sorbet to help cleanse our palette before our main entrees arrived.

My wife got the filet over puree cauliflower with two sauces a red wine reduction, and a Gorgonzola white sauce.

I opted for the Lobster pappardelle pasta.  Both were beautifully plated and tasted fantastic.  However we were getting pretty close to our bursting point, and there was still desert on the way. 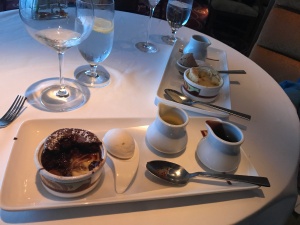 As our last course our server recommended the souffles which Palo is known for.  They initially only had a chocolate version, but recently have added an amaretto version.  So we ordered one of each and they were both fantastic.  The chef even came out at the end to ensure everything had been satisfactory which was a really nice touch.  With our stomachs bursting we slowly walked back to our cabin to relax for a bit before the fireworks show later that night as part of the pirate party. 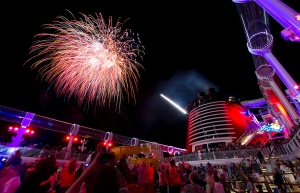 The next morning we arrived at Disney’s private island in the Bahama’s Castaway Cay.  It was another gorgeous day in the low nineties, but the sun was blazing.

As we exited the boat we decided just to walk to the beach instead of taking the tram.  It wasn’t too bad of a walk and was just nice to work off those extra calories we had ingested at Palo the night before.

The picture above is of the famous Mount Rustmore on the island.  You eventually come to an area with various souvenir shops with t-shirts, coffee mugs, pins, and of course beach supplies if needed.

We eventually did need to hop on a separate tram to get over to Serenity Bay which is an adults only area. 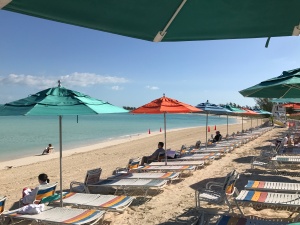 My wife and I had a couples massage scheduled in a cabana over in this area right on the beach which was an interesting experience.  The massage was about an hour, but seemed to go by way to fast.  We were very relaxed after that and spent the rest of the afternoon enjoying the beach, sun and water.  Before we knew it we had to head back to the ship before it left to take us back to Florida.

For dinner that night we were scheduled at the Royal Palace.  This was another French inspired restaurant that loosely reminded me of Be Our Guest in the Magic Kingdom. 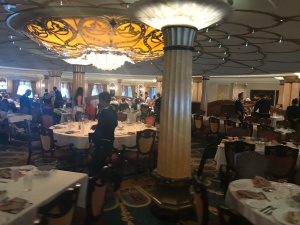 The food here was nice, not Palo quality but still very good.  My wife and I both started with the french onion soup which is a guilty pleasure of ours.  My wife had a horseradish crusted salmon which she really enjoyed, and I had a sliced sirloin. 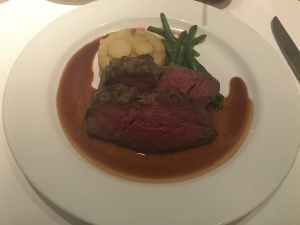 With dinner complete we wanted to try to enjoy the ship for a few more hours and wandered around on the top deck.  Eventually we headed to bed and when we woke up the next morning we were back in Port Canaveral.  We had a nice quick breakfast back at the Royal Palace and then were able to disembark the ship.

Overall it has been a fantastic little trip and the much needed sleep and relaxation make for a great vacation.  I would highly recommend the Disney Cruise Line, and we are hoping to go again in the near future maybe when our girls are a little older.  If you do take a Disney cruise don’t forget to bring some change so you can press those elusive pennies as they will be a great addition to your collection and are highly sought after by collectors.  Happy cruising!