I have spent a good amount of time this summer visiting Universal Studios and Islands of Adventure keeping an eye out for those new pressed penny designs.  If you read my post about the retired design stickers we found a few months ago, we have been anxiously waiting for those new pennies to show up.  Some have made an appearance and I’ll be posting about all the new replacements once they have all been released.  However, on my most recent visit, I actually came across a brand new machine.

This one caught me by surprise and to be honest I was lucky to even find it.  I had my two daughters with me as we visited Universal Studios first but had no changes, so we then went into Islands of Adventure.  The last few pennies we are waiting on still hadn’t shown up but we made our way around the lagoon just to enjoy the park for a bit.

There has been quite a bit of construction going on near the Jurassic Park area with rumors about a new Roller Coaster.  Nothing official has been released by Universal at this time.

We eventually made our way around to the Jurassic Park area and decided to head inside the Discovery Center for some air conditioning.

While we were inside I tried to think if I had ever noticed there were two floors.  On the main upper level, there is a quick service place for burgers and milkshakes, and a gift shop on the opposite side that has a 4 design hand crank penny machine.  So obviously I’ve been in that store a few times.  My girls ran over to the railing where the big T-Rex was located and noticed all sorts of things going on downstairs so we headed down to check it out.

There were quite a few dinosaur statues around and some interactive exhibits giving interesting facts about the dinos.  There was even a dino nursery with dino eggs just waiting to hatch.  They also had a few “scientists” walking around that were more than happy to answer questions you may have about the dinosaurs. 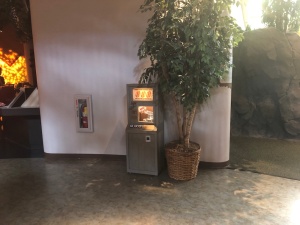 After we visited the nursery is when I noticed a penny machine stashed beside a planted tree which seemed like a strange place for it.

I started to wonder how long this machine may have been here.  The machine was in a pretty standard cabinet that looked like a wooden crate.

But it does have the NEW! sticker on the glass of the machine which seemed to be a new thing they are utilizing so I’m taking a guess that this machine was put here sometime this summer.

The designs on the pennies were of a Carnotaurus, a Triceratops, and a Raptor possibly Blue from the new movies.  Each design does also have Jurassic World along the bottom.

The latest Jurassic World movie Fallen Kingdom was released in June 2018 but maybe this is all due to that mysterious construction going on behind the Discovery Center building.  Guess we will just have to wait and see.