Shortly after I had moved to Florida my Sister gave me a gift membership into D23 (The official Disney Fan Club) which was an amazing gift for a Disney fan like myself.  To be honest, when I first got the membership I wasn’t sure exactly what it was all about or what perks I potentially could get, so I did some research.  The name itself is interesting as the D stands for “Disney, and the 23 is for 1923 the year Walt Disney founded the company.  You do get a very nice magazine each quarter that basically just advertises all the new movies, or theme park attractions soon to be released.  They also have a schedule of events that only members can sign up for, most of them have an additional cost to participate.  One of these events that my wife and I went to last year was a special screening of the animated classic Robin Hood which was celebrating its 45th anniversary.  Not only did we get to watch the movie on the big screen but there was a Q&A with one of the animators Burny Mattinson which was fantastic.  He spoke about his career with Disney and even went through some of the scenes in Robin Hood that he animated.

But the main event that most D23 members wait for is the biennial expo.  For 2019 the event was held on August 23rd – 25th in Anaheim at the Anaheim Convention Center.  I wish this was something that I could have attended in person, but flying to California for a weekend just wasn’t meant to be this year, however, I’ll be trying my best to make it to the next one.

This huge event has all sorts of things going on for any type of Disney fan.  There is special merchandise available, meet and greets, induction of new Disney Legends, and the most popular are the different panels that go over things like new Movies, or Theme Park Attractions.  This year with Disney acquiring fox they even had a Simpsons panel (whoever would have thought that would happen).

While I sat at home that weekend refreshing the online blogs for all the latest details being released I saw a picture from the official Disney Blog that caught my eye. 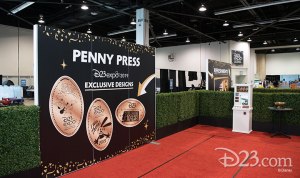 There was a special penny press available in the D23 Gold member lounge.  It was free to use but you did need to supply your own penny.  I was almost in a panic trying to figure out how in the world I would be able to get a set of this.  First I tried posting on Facebook in the different pressed penny groups I’m a part of, hoping someone was attending the convention and could get a set.  There was plenty of interest and other collectors jumped on board hoping to get a set for themselves, but unfortunately, it appeared like no one was close enough to try and get them.  Then I took to Instagram and Twitter hoping some friends would be able to get them, but that too didn’t pan out. With the convention only going on for a few days it seemed like it just wasn’t meant to be.

Suddenly I had an idea of one last potential opportunity.  I have an acquaintance in the industry that over the past couple of years I have become friends with and we communicate numerous times via email throughout the year about pressed pennies.  I really went back and forth on whether I should even ask about this set as I never want to take our relationship for granted.  I appreciate everything he shares with me and wouldn’t want to risk that because I was trying to get just a simple set of pennies.  However, his kind nature always gave me the impression that he enjoys helping and sharing info whenever he can so I thought I would simply ask if there was any way he had access to a set of the coins and if so I would be more than happy to pay for them.  I heard back pretty quickly and he was more than happy to see if there was any way to obtain a set. 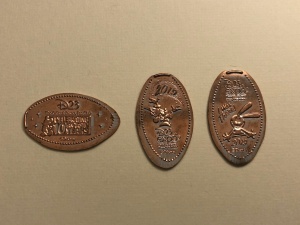 A few weeks went by and the most magical package arrived at my house with a set of these amazing pennies.

Of course, what would a Disney expo be without the famous Mouse himself.

Probably my favorite of the three is the above with Oswald the Lucky Rabbit.  I remember reading the details of how Walt Disney originally created Oswald and then lost him due to a contract technicality, and then in 2006 Disney traded NFL Play-by-play announcer Al Michaels for the rights to Oswald the Lucky Rabbit.  It’s an unbelievable story and if you are interested to be sure and check it out online.

This really was a great set of pressed pennies from an event that had pretty limited availability.  I had barely got these coins out of the package before I was sending my friend a thank you email and trying to portray how appreciative I was of his efforts to get this set for my collection.  I’m hoping someday in the future he may need my help for something and I will be jumping at the opportunity to return the favor.