Are two years in a row considered a trend?  Well if not I sure hope this continues.  Back in 2018 I visited Halloween Horror Nights at Universal Studios for the first time as a Florida resident and had an amazing time.  One of the fun finds during the event was a souvenir token I found and you can read about it here.

Well here we are one year later and Universal has done it again.  The theme this year is a retro 80’s style.  You can see from the pictures above the one on the left is during the daytime and on the right is after the sun goes down.  They project a Tetris like pattern on the entrance arches. 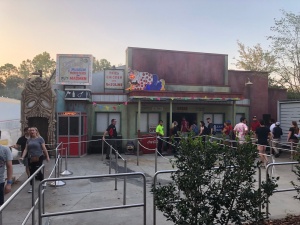 With our annual passes, we were allowed into the park a little early to wait in designated areas called “Stay and Scream”.  It helps you avoid the massive crowd that will gather in front of the park before the event starts.  It is nice to get a bit of a jump start on the houses/mazes but as you can see from the above they aren’t quite as scary when the sun is still up.  That picture was taken out front of the house themed around the cult classic “House of 1000 Corpses”.

Crowds can get pretty crazy and the wait times for the different houses can fluctuate throughout the night.  They do offer a smartphone app that you can use to monitor the wait times and is a priceless tool when trying to experience as many houses as possible.  They also have screens with the current wait times out in front of each house.  Above was for an original concept house called “Nightingales Blood Pit”.

Some of the scenes inside the houses can get pretty gruesome, but it’s not recommended for younger visitors.  I took the above picture which is about the only picture I had that wasn’t too gory.  This is the exterior of the Nightingales house.  Unfortunately, no photography or videography is allowed inside the houses. 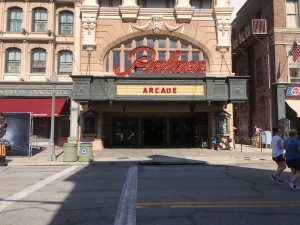 Back in the New York area of the park is an Arcade that is available here year-round.  However this year during Halloween Horror Nights they have converted it into the Palace Arcade which you may recognize if you are a Stranger Things fan (a show on Netflix).

This arcade was also given the 80s makeover and I almost felt like a kid again back in my youth spending countless quarters on video games.

They even swapped out some of the modern video games with retro ones like Rampage, Asteroid and Mrs. Pac-Man.

The only way to play any of these games is to get some of their special tokens.  The machines will not accept quarters for some reason.  But for us coin collectors this is a fun alternative.

There are quite a few of these token machines throughout the arcade and the exchange isn’t quite what it was back in the 80s.  You can 2 tokens for $1 or a bit of a discount if you get a larger quantity.

One side of the token has Halloween Horror Nights 2019, and the reverse has a Palace Arcade logo.  I did get a few of these tokens, this way I could keep a few for my collection and still play some retro games before heading back out for more scares.

Halloween Horror Nights is really an amazing event and I just can’t get enough of it.  The scares are all in fun, but as I mentioned above really not for small children.  I will be going back as many times as I can because the houses and scare zones are just so much fun and the scare actors do a great job.

I’m crossing my fingers that next year will continue this trend of fun souvenir tokens.