Every so often on a weekend when I ask my daughters what they want to go and do they surprise me by saying no to a theme park.  As I child I would have given a limb to live so close to these world-famous theme parks, but I guess sometimes you just need to do something else.  A recent weekend had us in just this predicament so I quickly searched around for a place we haven’t visited yet and found the Brevard Zoo which was about an hour and a half away on the east coast.

Due to the drive, we arrived later than I would have usually preferred, and we did run into a bit of an issue finding a parking spot.  The parking area is a decent size, but it was packed which on the upside is a good sign that this is a popular place. 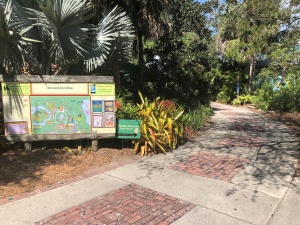 After we paid for our tickets we headed inside.  This was a really nice place with some wide-open areas to just sit and enjoy the day, plus a lot of different geographic zones showcasing the animals. 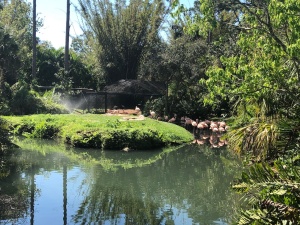 Weaving all around the zoo was a large pond/lake.  At one point we did see people canoeing with a guide which I believe is something the zoo offers for an additional cost.  We may have to come back and try that out when the girls are a little older so I don’t have to do all the paddling. 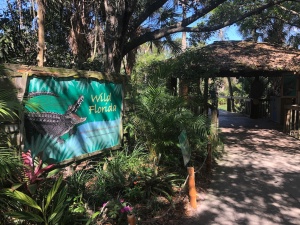 Even though we live in Florida it’s always still fun to see these zoos with a “Wild Florida” area filled with the wildlife we can see almost on a daily basis.

There were plenty of pathways taking you through the different exhibits, and most of them were a bit elevated so you could get a nice higher up view of the animals.

Of course in the Florida area, we saw plenty of Alligators both swimming (floating) or resting on land catching some sun. 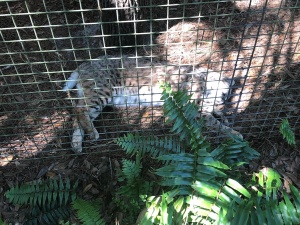 We also came across a Bobcat which my daughter absolutely was fascinated with and wanted to bring home with us.  Thankfully we found a popcorn stand nearby and I was able to bribe her away from that idea with a snack.

After visiting our local Florida animal friends we headed into the Australian outback. 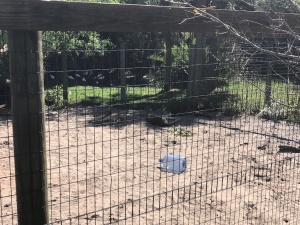 They had some big lizards back here but of course, the main event was the kangaroos.

Next was probably my favorite area of the zoo which was an African area.  It started out with an exhibit filled with Meerkats which is always fun to watch as they pop their heads out of the holes.

But then as we continued walking the path started to go up on an incline when we came to the big guys.  On one size were some zebras and a rhino all enjoying some lunch.

After that, we strolled over to the other side where the giraffes were found.  You could pay for some lettuce leaves to feed them which was a very popular activity.  I’m not sure exactly how much food a giraffe eats in a day, but I’m sure they get plenty at this place.  The walkway eventually deadends and you make your way back through the African area but we did spend most of our time here as I just thought it was a unique way to get up close and personal with the giraffes.

After we finished checking out the zoo and had some lunch along the way we headed back towards the front of the park.  Just outside of the Wonders of the Wild gift shop we found the penny machine that I maybe sorta kinda knew was here.

This was a really cool looking penny press.  It was shaped like a tree stump about four feet tall, and then had a statue of a monkey on top making sure you don’t use the machine incorrectly.  I’ve seen a similar machine at an Insect machine in Philadelphia years ago (just without the monkey).

The penny designs were pretty standard for a zoo.  Meerkats, a River Otter, an Alligator, and a Zebra.  To be honest, I’m kind of surprised there wasn’t a Giraffe design but I guess I’m one of the few that really liked that area of the zoo.

This wasn’t the largest zoo we have ever visited but it was a lot of fun and had some very unique exhibits that I really enjoyed.  I’ve always really loved visiting zoos and aquariums so you don’t have to twist my arm too hard to go to one.  Especially when they are within a reasonable drive from home, and of course having a pressed penny machines helps.