Recently I was doing some research for places to find pressed pennies.  Don’t worry we have plenty of places to visit.  But I wanted to take a bit of a break from the theme parks and thought some unique locations around Florida might be a nice change.  Something jumped out at me as I noticed a large number of State Parks have pressed pennies.  So I created a new to-do list and figured we would start checking them out.  Just this past weekend my youngest daughter tagged along as we visited our first park. 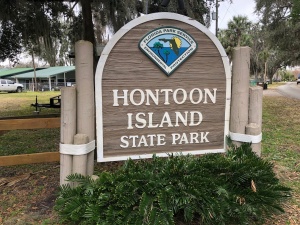 We drove north to Hontoon Island State Park which took us on quite a drive on some back roads and through a residential neighborhood before we finally found it.

The parking lot is a bit strange as it’s just located between a couple houses, and the property wasn’t very big.

Then it dawned on me that this was actually just the parking lot, you actually needed to find a way over to the Island.  For some reason when I saw Hontoon ISLAND State Park, I didn’t realize it was actually on an island. 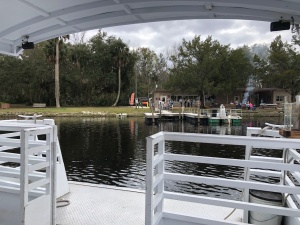 They do offer a free ferry that will take you over to the island, but please note the ferry is not very large and can only hold about 6 people at a time.  Also, the ferry stops running at a specific time each afternoon.  Make sure you don’t miss that last ferry or you may need to try and convince a nearby fisherman to take you back across in their boat.  The last ferry time is posted near the Ranger Station on the island, so take note.

Once we were on the island it has plenty of picnic tables, a large playground for the kids, and quite a few barbeques available should you want to make some lunch. 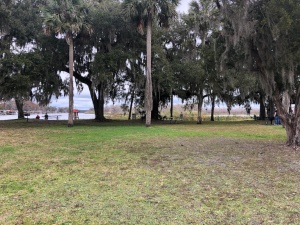 My daughter just loved the large open areas so she could run around and the playground had plenty of kids to play with.  There was a birthday party going on under a covered patio area which I guess you would book at the ranger station if interested. 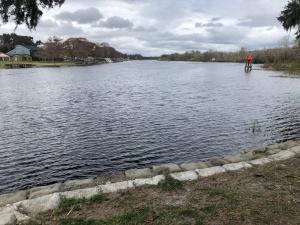 There were a few benches located along the waterfront which made for a nice place to just sit and enjoy the view.  I’m not sure if Manatees frequent this area during the winter months but this does seem like the perfect place for them.

Back near where the ferry drops you off on the island is the Ranger Station and a few other inside areas.

At the far end, opposite from the Ranger Station is the Visitor Center.

Inside is a small museum with lots of information about the Island and the State Park which is really interesting.  My daughter was not so intrigued and started asking for some ice cream. 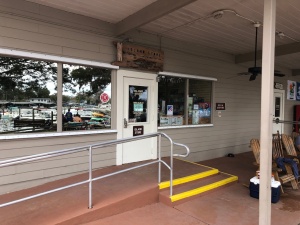 To try and find her some ice cream we headed next door to the Island Store.

This was a cute little general store with a decent selection of items you may need while visiting the island.  They had charcoal for the barbeques, or snacks like chips and candy, plus plenty of cold drinks.  Thankfully they also had a cooler in the corner with plenty of ice cream bars.

Near the ice cream cooler and drink fridge was the penny press machine tucked away in the opposite corner.

The machine was on wheels which were interesting but I’m sure it’s just so they can more easily move it around the store as they change things around.  The wheels were locked firmly so when I used the machine it didn’t move around and was easily to use.

The penny designs included a Snake, a Bear, an Alligator, and the Owl Totem which is located in the park. 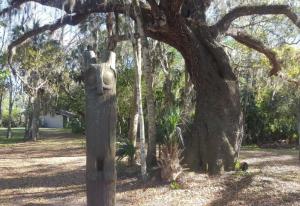 Quick side note, here is a picture of the Owl Totem from out in the park. 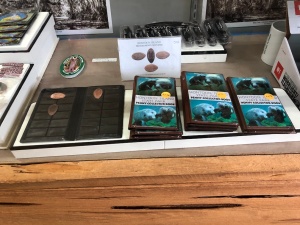 After we pressed our pennies we headed up to the cash register to pay for our ice cream and I noticed in the glass case they had some pressed penny books and extra pressed pennies from the machine.

We went back over near the playground to enjoy our ice cream.  My daughter then continued to play on the playground for while until the birthday party (we were not invited to) started to dispurse.  I figured that was a good time to try and ensure we get back to the main land before the ferry stops running.  This was definitely a unique state park to visit and we had a lot of fun.  The pressed pennies are a great memento I have of this great afternoon we had and can’t wait to check out our next state park.