They’re here!!  It’s that time of year again and the 2018 dated pressed coins have started showing up all over property.  I spent the good part of my weekend driving to all the parks and resorts in an attempt to get all these new coins.  But unfortunately not all of them have been made available.  Just like the last few years there will be a total of 15 designs.  I was able to get 11 of them, and will be updating this post as I acquire the last 4.  I’m sure these final few designs will be made available in the next couple weeks at the latest.  So let’s get started.

My trip started early Saturday morning at the Animal Kingdom.  To my surprise the large crowds were there to visit Pandora and not get these brand new coins.  But I guess that works out better for us collectors.

Located in Dinoland USA in a store called Chester & Hester’s Dino Treasures.  The penny at this machine has 2018 with the new slogan “The Year to be Here” and a small Tree of Life. 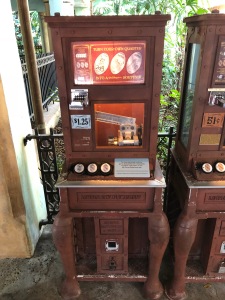 The second machine in the Animal Kingdom is at the Harambe Railroad Station platform.  This train will take you to Rafiki’s Planet Watch but is not required to use the machine.  This machine pressed a quarter of Pluto and the year 2018.

After leaving Animal Kingdom my next stop was over at the All-Star Sports resort.  Located just outside the Game Point Arcade is where the machine is found. 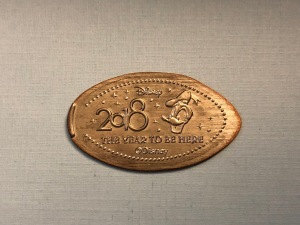 This machine had 2018 Donald Duck pressed on a quarter.  Thankfully the next machine wasn’t too far away and just down the street in the All-Star Music resort. 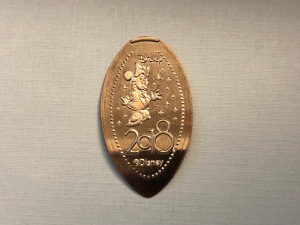 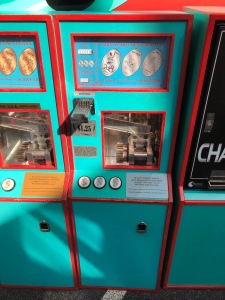 Spending more time just outside the Note’able Games arcade to use the machine and press a quarter with 2018 Minnie Mouse.  I grabbed a quick snack in the food court and hopped back in my car for the next stop.

I was making pretty good time heading all over Disney property and found myself at Epcot for the next three machines.  First was in the Mouse Gear gift shop.

This penny design is similar to the one I collected earlier at the Animal Kingdom except it has Spaceship earth and 2018 The Year to be Here.  Somehow I managed to leave this store without buying anything which almost never happens, but my wallet definitely thanked me.  After leaving the store I headed towards the World Showcase and into the Disney Traders store. 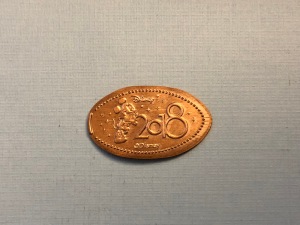 Every time I use this machine I think it should do more than just press pennies as it looks pretty fancy.  But alas is just pressed pennies which is still fine with me.  The design from this machine is on a penny and is the main mouse himself Mickey leaning on the 2018.  With the penny safely stored away I checked my Disney Parks app and was able to grab a fastness for Soarin’ which is one of my favorite rides. 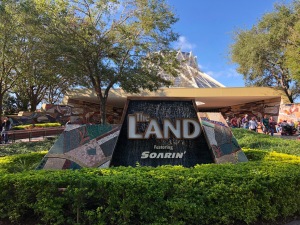 Over at the Land pavilion I headed in to use my fastness, but once done I headed upstairs towards the Garden Grill which is a revolving restaurant where you can meet Mickey, Pluto and Chip and Dale.  Right beside the restaurant is also where I found the next machine.

Just like in the restaurant this pressed quarter has the dynamic duo of Chip and Dale underneath a Mickey ears hat and 2018.  For some reason I thought it would be a good idea to leave my car in the Epcot parking lot and take the monorail over to the next two stops.  Once back at the Ticketing and Transportation center I switched monorail and decided to check out the Contemporary Resort first.

For anyone that has taken the monorail over to the Contemporary you exit onto a planform and then need to take an escalator down to the fourth floor concourse.  This is where you can find Chef Mickey’s or the Contempo Cafe for something to each.  But this is also where the Game Station arcade. 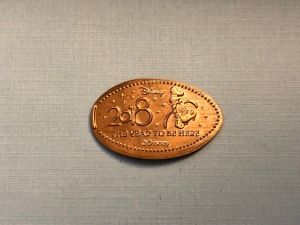 The first machine here had a design of Goofy with 2018 The Year to be Here.

A few steps to the left and I was face to face with the second machine offering a 2018 design.  This machine had an image of Minnie Mouse and The Year to Be Here pressed on a quarter.  I left the arcade and headed back up to the monorail platform so I could head into the Magic Kingdom. 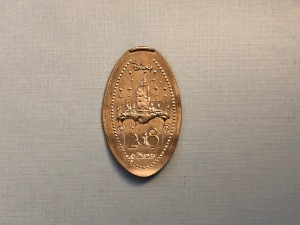 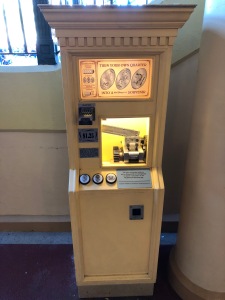 Immediately upon entering the kingdom I headed underneath the Main Street Railroad station.  There are two machines down here but only the quarter machine had a new 2018 Cinderella’s Castle design.  A little further up main street I headed into the Emporium for the last available 2018 design. 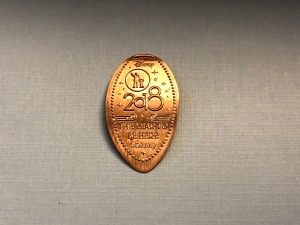 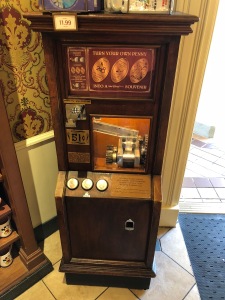 This one is probably my favorite this year.  It has 2018 with the soon to be famous tag line for this year (I promise not to type it down again).  But the big winner on this penny is the image of Walt and Mickey holding hands.  This is based on the famous Partners statue that is a reminder to all how this all started.

Update 01/09/17:
I made it over for a quick follow-up visit to Disney’s flagship Grand Floridian Resort & spa.  About a week ago I visited here and the design hadn’t been updated, but on this visit the change had finally been made.  It’s on the second floor concourse right near the doors that led out to the monorail platform.  This design is of Chip & Dale under a Mickey Ears hat and the year 2018.

Update 01/10/17:
After work I took a quick drive over to Hollywood Studios to try to get the penny that was released in the Rock Around the Shop.  This is the gift store at the exit to Rockin’ Roller Coaster.  However, if you are a chicken like me and don’t want to ride the coaster, you can just walk in the “Exit” and up the ramp into the store.  The design is of Mickey’s face with 2018 and the new slogan.

Update 01/13/17:
Since we are just out of the holiday season I don’t want to say this is a slow time at the parks but it is a little less crowded.  Due to this the parks all have much shorter operating hours during the week so it was hard to get into the Magic Kingdom after work.  However I was finally able to get over there today and get the pressed penny at Sir Mickey’s

Updated 01/24/2017:
The last pressed quarter finally showed up today but it wasn’t where we were anticipating it to be.  It was rumored that this coin would be available in the same location as last year which is the Stage 1 Company (Muppets) gift shop in Hollywood Studios.  But due to this location being partially under construction and the machine mysteriously behind a construction wall this design was moved (temporarily?) to the All-Star Movies Resort.  Right alongside the other 3 machines in the World Premier Food Court is where you can find this last design. 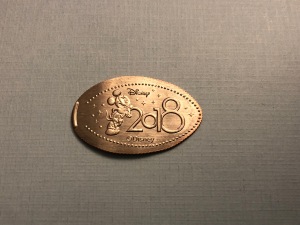 This design may not be here all year and potentially could move over to the Muppets store in Hollywood Studios once construction is completed, but only time will tell. 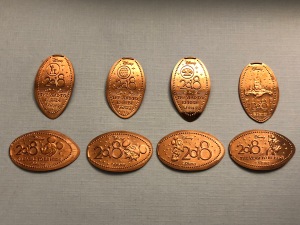 Here’s a look at the eight pressed penny designs. 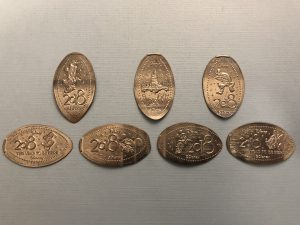 and the seven pressed quarter designs.

These new 2018 pressed coins are really nice again this year.  This has become one of my favorite times of year for collecting pressed coins.  It’s exciting to see the new designs and of course a lot of fun to trek around property collecting them all.  Make sure to grab a set or two for your collection before the year ends.