One weekend back in February my daughter Hanna woke up a little earlier than usually, and when I went to get her she immediately asked to see some fish at the aquarium.  I was taken back a bit as this was the first she had asked for this and also it was very random to be asking for this at 6 o’clock in the morning.  But being the sucker I am for her I said we would go once everyone else was awake.  We decided against going to the large Adventure Aquarium in Camden, NJ we have gone to in the past.  It’s a little further away, and I found it was almost too big for Hanna to keep her interest.  Instead we took a shorter trip to Point Pleasant Beach.  Yes you read that right we headed to the beach in February, but just check out how beautiful the sandy/snowy beach looked. 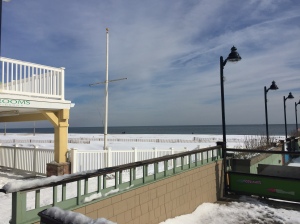 The water even looked cold, and the wind coming off the Atlantic ocean made it feel even colder.  This was the emptiest I had ever seen a boardwalk in New Jersey and it was kind of eery.  From where we parked we only had a short walk over to the Jenkinson’s Aquarium. 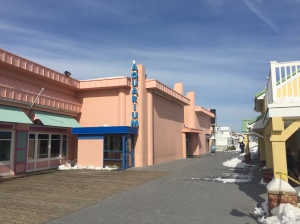 We paid the small reasonable admission fee and headed inside.  Hanna was really excited to see all the sea creatures and of course the other kids that were visiting as well. 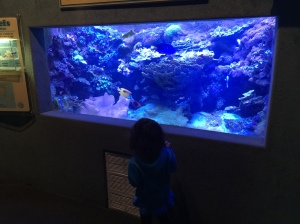 The aquarium is not very big which is probably due to people wanting to get back on to the beach during the warmer season, but they still pack a lot of things inside.  The tanks contain all the usual creatures, and there is also a second floor with a touch tank.  Below is a picture of Hanna trying to get up the nerve to touch a small ray. 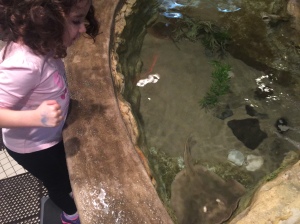 We eventually walked back down to the main floor and near the penguin exhibit I saw two magical pieces of machinery.

Years ago I had visited this aquarium and came across the 3 design electric penny machine, but it hadn’t been previously listed on the penny collector.com website.  I scrambled to get spare change at the time to press the designs, and once I was hope I took great pride in adding this new location to their website for other collectors.  Right before this trip I did check the website and it was listed that this original machine had been retired and replace with a new 4 design hand crank model.  Always being prepared I had brought enough change for the new machine and some extra just incase another machine was found.  Good thing I did.  As you can see in the above picture both machines were there.

The original machine was in working order but did have the same designs I had collected 6 years prior.  I figured since I was here I would press a new set.

For the most part these pennies pressed pretty well, and only one rolled a little short.  The designs included a Seal, two Penguins, and a Sea Turtle.

The second and brand new machine had some very nice cabinet art work and was in perfect working order.  Hanna had a great time trying to help me press the pennies. 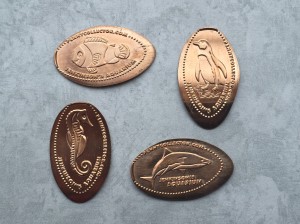 Each of these designs said Jenkinson’s Aquarium and had images of a Clown Fish, Penguin, Seahorse and a Shark.  With the two sets of pennies in my pocket we finished our visit to the Aquarium which was just the right size for Hanna.  He had a great time and it seemed to keep her entertained right up until we had to leave.