It’s been a few weeks since the last Decades set was available, and just a few days ago the next set in the 60th Diamond Celebration were put on stage.  As with the other Decades sets this machine is located at the World of Disney Store in Downtown Disney, and can be found in the middle set of doors. 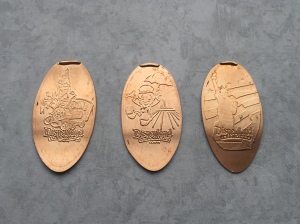 Including this set the total number of 60th Diamond Celebration coins that have been released so far is 51.  The rumors are that there will be 60 in total which would make a lot of sense.  So that means there are 3 more sets still to come.  I’ll be sure to keep my eyes open for these last few sets and will share them as soon as I have them.