It’s been a little while since a new machine became available at Walt Disney World in Orlando Florida, but just this past week or so that finally changed.  This new machine is located in the Prop Shop where it seems almost every other penny machine in this park is now located.  For those of you that don’t know there were some major changes announced for Hollywood Studios over the next few years which include a Toy Story Land and for you anyone interested in a galaxy far far away…Star Wars Land.  Below I have listed one of the concept drawings that has been floating around online and I must say if we get anything close to this it would really be amazing.

The reason I bring these up is that there are a lot of changes going on at Hollywood Studios these days.  Numerous attractions have already closed with potentially more to come as the additional space is needed for these new Lands that are being installed.  With so much going on it seems like the penny machines are being gathers into a hand full of locations which makes finding them easier.  The Prop Shop is located back where Streets of America meets Pixar place, this is also the area where the Studio Catering Co. and Honey I Shrunk the Kids Movie Set Adventure are also located.  The Prop Shop is now home to I think about 7 pressed coin machines in total which could make for quite a haul in a short amount of time.  This latest machine to be put on stage is a 4-design hand crank model themed around the popular Pixar movie Monster’s Inc. 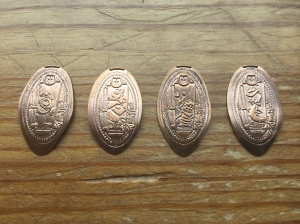 The designs include: Mike Wazowski, Sully Sullivan, Boo, and Randall.  Each character is shown coming through one of the famous doors in Monstropolis.  I was quite impressed with the detail of each of these new coins, but also a little surprised they were utilizing this movie when they have a few other newer titles that were recently released.  In any case they make a nice addition to the collection.  With all the changes that will be going on at Hollywood Studios you may want to get all the pressed coins you can because who knows what will happen to these machines when buildings start coming down and new planets start showing up.