Years from now this may be something that we only vaguely remember when playing a competitive game of Trivial Pursuit with family and friends.  No I’m not talking about the current COVID pandemic, but rather a more light hearted event that became an internet sensation.  I’m talking of course about Bernie Sanders and his Mittens.

For any readers that may not be familiar, Bernie Sanders is a US Senator from the state of Vermont.  Inauguration Day was on January 21st, 2020 where Joe Biden was officially sworn in as the 46th US President.  This took place at the US Capital in Washington, DC with a select few in attendance.  Once of those being Bernie Sanders and during this event he was captured in the above photograph.  As people like to say this was just “Bernie being Bernie”.  But it immediately took the internet by storm as people started photoshopping Bernie into all kinds of places and situations creating a slew of memes. 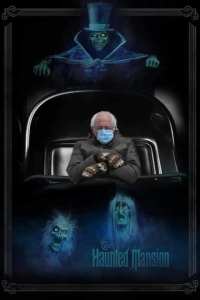 As a few examples I pulled some that were associated with Theme Parks.  Here is Bernie riding in a Doom Buggy through The Haunted Mansion.

Then he hopped on Splash Mountain for a ride into the Briar Patch.

Not a ride I enjoy, but looks like Bernie wanted to take a spin on the Tea Cups. 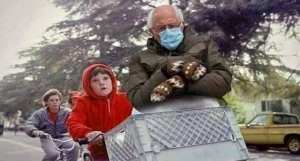 Let’s not leave out Universal Studios with an E.T. version.  Wow I could just go on and on with these.  They were just fun to see and every day just spawn more and more of them.

Then one day as I was enjoying my daily dose of Bernie memes I came across a special set of pressed pennies from our friends over at The Penny Depot.  How could I resist these!  I quickly purchased a set and they are fitting into my collection nicely.  Hopefully this will help start off 2021 on a lighter note as we try to work our way through this year.

Enjoy and Keep on Pressing!