I know a few years ago when Disney first released a collectible Medallion machine that I was at first intrigued enough to get a set but tried to convince myself I wouldn’t keep getting them.  But as time has gone on, and more and more of these machines are released I have found my medallion collection growing a bit out of control.  The Festival medallions over at Epcot are probably my favorite and I have been keeping an eye on that machine, but then out of the blue, we got a report about a new set not too far away at the Magic Kingdom.

After work, I took a quick trip over to the park to try and find these new medallions.  I always enjoy walking under the Railroad station and having Main Street USA just reveals itself.  In my mind, it’s always a fun way to be welcomed into the park.

I continued up Main Street towards the Emporium.  Just a quick note on this store, with the current situation in the park they are trying to keep everyone moving in one direction so many of the doorways here are listed as “Exit Only”.  To get into the store you do need to head about halfway up Main Street and enter near the Disney Clothiers store. 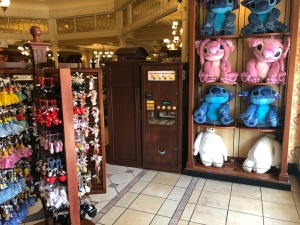 Brace yourself when you enter this store as it can be quite chaotic.  It gets worse later on when the park is closing down for the night, with people trying to get their last-minute souvenirs.  The medallion machine is tucked away near the area of the store that has a big selection of Plush toys (sorry it’s hard to be more specific).  Just around the side of one of the checkout counters.

The machine is in a pretty plain cabinet but does actually blend in well with the aesthetics of the Emporium.

The cost is the same as the other machines around the property.  $5 per medallion or you can get all 4 for $15.  This is a slight change from before, where if you were paying with a credit card it would only allow you to get 3 of the coins for $10, and then you had to come up with cash for the 4th design which was pretty inconvenient.  Now they let you get all 4 at once which is much nicer. 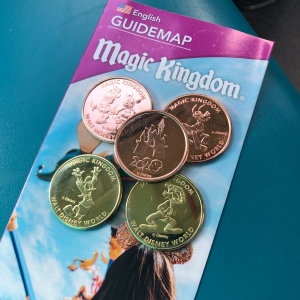 The designs on each medallion include Mickey & Minnie holding hands, Pluto, Donald, and Goofy.  On the front of the coin with each character are the words Magic Kingdom, and Walt Disney World.  On the back of each coin is the 2020 Cinderella Castle logo they have been using this year.

This is another great set of medallions, but wow they get expensive.  Especially since pressed pennies are now increasing to $1 each, and medallions at $5 each I may need to get a second job to keep up with my collection.  I did find it a little strange that it’s October and they are releasing another set of dated 2020 medallions but figured these were probably already in the pipeline to be released earlier this summer but got delayed due to all the shutdowns.  Guess in a few months we can look forward to seeing what 2021 designs we get.