A few times a year I scour the internet for anything new or unique concerning Pressed Pennies.  In the past, this has let to retired online games with pressed penny machines in them, jewelry, unique art, a porcelain statue, and on more than one occasion my searches bring me to Etsy.  Just recently I did this same search and did come across something new (which doesn’t always happen) and it then sparked a similar topic I had wanted to write about in the past but never got around to it.  So here is my attempt at merging those two together. 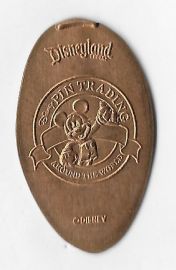 Many of the different Disney parks have released pressed pennies with designs celebrating their very popular Pin Trading program.  Recently my daughters have become avid pin collectors and really got into pin trading primarily with the Disney Cast members.  In one of the pin stores, one of my daughters asked if there was a pressed penny pin we could get and I told her I didn’t think those existing.

Now skip forward to my recent random search on the internet for Penny related things and came across an Etsy store: Wonderful World of Pins Co.  This really cute store had a few different pin designs available but one of them really caught my eye.  It’s a pressed penny design of Cinderella’s Castle with some fireworks, and also has 1971 at the top which is the year the Magic Kingdom opened in Florida.  The colors were really pretty and I just really liked this so I immediately purchased one.  I will also say it looks amazing in person and it now has a special spot in our pin collection, but I’ll have to make sure no one in my family tries to trade it away.

After the Castle pin had shown up it sparked a memory I had of some other pins that had been released in Disneyland California years ago.  These were a pressed penny style pin set that was envisioned by WDI (Walt Disney Imagineering).  The pins were available to Cast Members (employees) exclusively at the Mickey’s of Glendale store which is for Cast Members only.  You can find these pins on eBay but the resale cost is pretty high.  I keep an eye out for deals whenever possible, and was able to get the above set for a reasonable price.  This is actually the second group of WDI Pressed Penny Pins and was released on November 6th, 2010.

I hunted through my Disneyland pressed penny collection and found the matching pressed pennies to that pin set.  It really was a fantastic idea to recreate these penny designs in pin form and I wish they did this in Florida (and not just for Cast Members).

As of right now, there are 21 sets of these pins for a total of 74 pressed penny pins.  They range from sets of the Haunted Mansion to Wreck-It Ralph and they are all based on pressed penny designs.  The last set (#21) was released around September 10th, 2014.  That is also quite a while ago so these may not be coming back anytime soon.  I was going to add pictures of the other sets but my resource for most of these details was from the fantastic Disneyland Pressed Penny resource http://www.ParkPennies.com.  Here is a link to their page all about the WDI Pressed Penny Pins with pictures of all the sets should you be interested in more information.

Thanks for checking in and be sure to let me know in the comments if you ever come across any unique items themed around Pressed Pennies or their machines and I’ll be sure to check it out.  I’m still waiting for Lego to create a Pressed Penny machine in Lego form but so far nada.  Happy Pressing!