A week after Disney reopening the Magic Kingdom and Animal Kingdom theme parks, they were ready to open their other parks Hollywood Studios and Epcot.  Not only was Epcot reopening but they were also kicking things off with their Food and Wine Festival that will now be running longer than any previous year.  I was able to snag a Park Reservation to check out Epcot and see how things had changed. 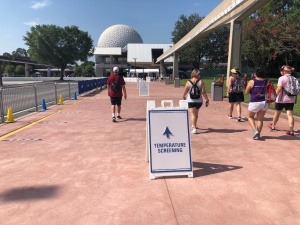 Just like the other parks, there is a required temperature screening before you can enter the park.  It was quick and simple with no line when I had arrived.  Afterward, I headed through the security check and then up to the main entrance.

A really nice thing that I don’t think I’ve ever seen before at the parks is that all of the entry touchpoints were open.  This helped prevent any line from forming while you scan your magic band or park ticket. 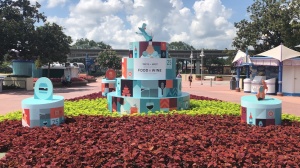 As I mentioned above the Food and Wine Festival officially started July 15th and will run through the Fall.  This is also the 25th anniversary of the festival. 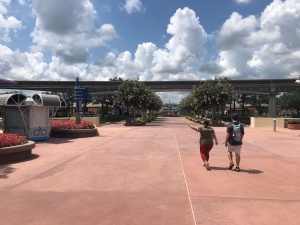 Walking back towards the World Showcase you can see the very light crowd level in the park.  The nice thing about Epcot is that it a large property and allows guests quite a bit of room to spread out.

One thing that I thought was interesting is that not all of the Festival food booths were open.  Quite a few of them had signs stating they will open in the “Fall”.  Also, there was next to no Food and Wine merchandise available, instead, they were still trying to sell through the Flower and Garden Festival items from before the parks had closed in March.

I decided to head towards the Mexico Pavilion and start my way around the World Showcase in that direction. 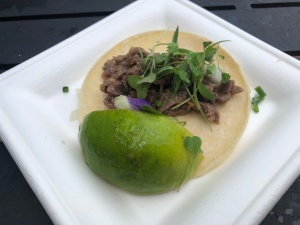 The first open booth I encountered was the Mexico booth and I just had to stop and try something.  The Ribeye Taco was just calling my name.  It was really good but the portion size was really small and at $6.95 seemed overpriced. 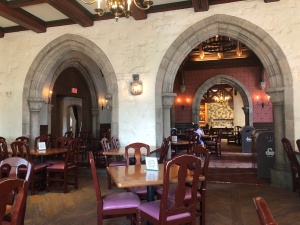 I continued my trip around the world by next visiting the Norway Pavilion.  The line for the Frozen Ever After attraction was around 30 minutes which wasn’t too bad compared to normal operating days.  However, I was more interested in visiting the Relaxation Station in this area that is located in the Akershus restaurant.  Previously this was a Character Dining buffet but with all the current restrictions that are not happening.  Instead, you can come inside for a break from the sun for some air conditioning and a chance to remove your mask for awhile.  I have never been to this restaurant but I was really amazed at how beautiful it was.  The decorations and theming were really great and I hope to actually eat here sometime in the future. 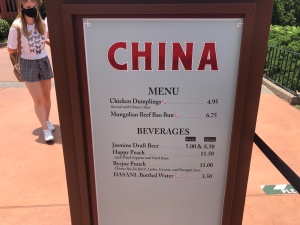 Next up was the China food booth with the above menu available.  The offerings do seem limited this time around.  I’m not sure if this will change as the festival continues. 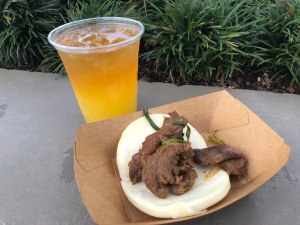 They also have some variation of a Bao Bun at this booth which I’m obsessed with.  This year it was a Mongolian Beef version so I picked it up with a cup of the Happy Peach drink.  This was another winner for me, the beef was flavorful and the bun was soft and pillowy.  Even though the bun was $6.75 I felt it was a much better value than the taco I had earlier.  The peach drink was just okay and at $11.50 due to it containing alcohol was pretty pricey.

As I stood to the side of the China Pavilion enjoying my food, all of a sudden the music ramped up and I was greeted by a Character Cavalcade featuring Elsa and Anna.  I mentioned this in the Magic Kingdom review but I wanted to say again that I really think this is a great way to enjoy the characters.  These impromptu experiences are not scheduled and just happen randomly throughout the day.  They don’t last long unless you follow them around the Showcase.  But within just a few minutes they had passed by where I was standing and then everyone went back to what they were doing.  I hope they keep these up in the future.

I continued around the Showcase and as you can see the crowds continued to be really light and in my opinion very enjoyable.  All too often, I’ve visited the parks with massive crowds and it can take some of the fun out of your day.

Over in the Japan Pavilion with the Matsuriza Traditional Japanese Drummers no longer performing it was really quite.

The Morocco Pavilion was also extremely quiet.  I walked through the marketplace and think I saw only 2 or 3 people.

Next up was the France Pavilion.  My wife loves the Chocolate Croissants available in Les Halles Patisserie and I was going to surprise her with one, but unfortunately when I went inside the Patisserie was closed.  I have seen that a few days after my visit it has reopened with a limited menu.

One completely new experience for me on this trip was the ability to check out this large Pavilion building that I’ve only ever seen from a distance.  It’s located between the United Kingdom and Canadian Pavilions.

Usually, this is reserved for special events, but during the Festival it’s been opened to guests and houses a few different food booths.  This place was huge!  Plenty of space inside, lots of high top tables that were all appropriately spaced out, and live music were playing.  Plus there was plenty of Air Conditioning, always important during summertime in Florida.

The food booth all the way in the back of the Pavilion was dedicated to Macaroni & Cheese which sounded pretty good to me.

I opted for the Buffalo Chicken Mac & Cheese which was also really fantastic.  The Buffalo flavor was not very spicy and I would have preferred a little more spice for my taste.  Since Disney wants to make sure as many people can enjoy it their spicy level is usually pretty low.  But in any case, I reall[y did enjoy this and was on quite the roll this trip with Festival foods.

After enjoying a bit of a break in this Pavilion I headed back out to the Showcase and finished my tour.  I headed back towards Future World and visited a few areas like the Imagination Pavilion, The Land, and The Seas with Nemo and Friends. 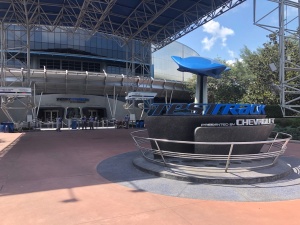 Nothing new in any of those areas, so I headed to the other side of Spaceship Earth and headed towards one of my favorite attractions Test Track.  Unfortunately, this ride was not working when I got there, but I decided to go around the side to the Simporium (gift shop). 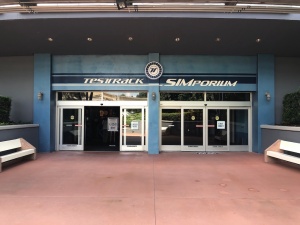 I spoke with a Cast Member who confirmed that the store was open even though the ride was down.  There usually is a 3-design penny machine inside and I wanted to make sure it was still there, but to my surprise, it was gone. 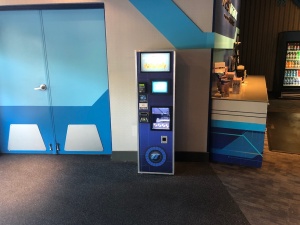 In its place was a new 8-design touch screen pressed penny machine.  First I had to do my usual photoshoot with the machine and then I went up and pressed my set.  The Cast Member told me I was the first guest (other than the tech who installed it) to use the machine.  I felt so honored to be the first!

This was a nice set of designs all themed around Test Track.  There are a few with Mickey and his friends as well as a couple with some unique Test Track logos.  I was so happy to find some new pennies on this visit and it was a great way to end my day. 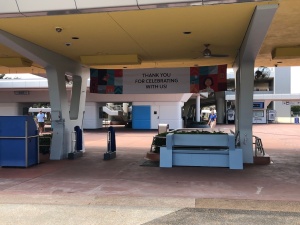 My plan was only to try a few food items this time around as I really wanted to spend most of my time reviewing the pressed penny machines.  I’m planning on going back maybe in August to do a full Food and Wine Festival tour with my wife and friends which is something we do every year.  As for the penny machines around the World Showcase, they were all pretty much still in their usual locations, only a couple were not open like in Germany and Canada.  Those machines are located in the gift shops which were not open that day.  The machines in Future World were all the same and available other than the new one at Test Track.  It was definitely a great day and so much fun to be back in Epcot.  I’m looking forward to visiting again to really dive into the Food Festival and hopefully, we will see some more new pressed pennies soon.