With the rise of so many streaming services like Disney+, Hulu and of course Netflix, there is a massive amount of new shows and content available to us.  I will admit that my Netflix binging has gone down with the recent release of Disney+ which just seems to be playing on our TVs 24/7.  But there were still a few shows outside of Disney that I was just drawn into and continued to watch.  The first was Game of Thrones which finished up the services in 2019.  So that only left one show that I truly enjoy, and it just so happens to be on Netflix.

Stranger Things was initially released in 2016.  I was not one of the first people to watch it and actually held off at first worried that it was being overhyped.  Friends were saying it was like Goonies (one of my favorite movies) with a Sci-fi / Horror twist.  I was definitely intrigued but decided I would just hold off for a while to see if the buzz continued.  Eventually, I had run out of other shows to watch so I figured I would give it just a couple of episodes to see if I was drawn in.  Sure enough, it was a hit with me and I quickly binged through the entire first season.

For those of you that may not be familiar with this show I’ll grab a description I found online to try and help explain a general overview of the show.

The series is a mix of investigative drama alongside supernatural elements portrayed with horror, science fiction, and childlike sensibilities. The series is based in the 1980s and infuses references to the pop culture of that decade, and also took inspiration from strange experiments that took place during the Cold War and real-world conspiracy theories involving secret government experiments.

I don’t want to give too much away in case you decide to check it out, or maybe you aren’t up to date on all the episodes.  They currently have completed 3 seasons, and the 4th is scheduled for (hopefully) later in 2020.

As I’m sure most of you are familiar with we get plenty of junk mail and spam each and every day.  I’m on so many mailing lists that some of them I’m pretty sure I didn’t actually sign up for.  But every so often I do get one that piques my interest.  I primarily use the pennycollector.com website for research when I’m visiting new cities or trying to find penny machines in my area.  Every so often I have purchased items from their online store and I guess that’s how I got on their mailing list.  In a recent newsletter, they were offering a special set of pressed pennies themed around Stranger Things.  Unfortunately, these sets they offer are usually in a limited quantity so I headed over to their website as quickly as possible to place my order. 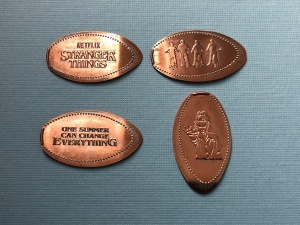 It didn’t take too long for my pennies to arrive in the mail and I was very happy with this fun set.  There are images of the Stranger Things logo, their tag line “One Summer can change Everything”, a silhouette of the main cast on their bikes, and a nice design of the Eleven “El” who is the young girl with telepathic and psychokinetic powers.

Of course, I do have to leave some bad news here.  As I was writing this post I did double-check the pennycollector online store and this set is completely sold out.  You may be able to find a set on eBay or another reseller.  I do not work for pennycollector but do use their site very often and think it’s a great resource for collectors.  My recommendation if you are interested in having the ability to get future limited sets like this would be to visit their site and join their mailing list.  It’s free and they really don’t send out too many emails.  Hopefully, this is something they will continue to offer for popular tv shows or maybe even movies.  Maybe they will be open to some suggestions!