I think we all knew this was inevitable.  First, we saw the new penny machine in Toy Story Land released at $1 per penny, then all the 4-design machines in the Magic Kingdom were converted to $1.  Now I’ve seen it with my own eyes, Epcot has been changed as well. 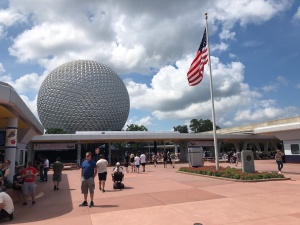 I’ll try not to keep harping on this but Epcot basically is a big construction site right now. So many changes are coming and I’m sure that it will be beautiful once all done.  It makes getting around this park now a bit of a pain with all the construction walls and buildings being torn down but I was on a mission to find all these converted machines. 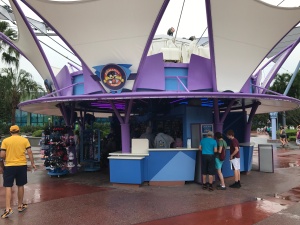 Just beyond Spaceship Earth (the big golf ball) is Pin Central.  Basically, just a stand where you can buy a ton of different Disney Pins, or trade with cast members and other guests.  On the left and right sides of this stand were two penny machines. 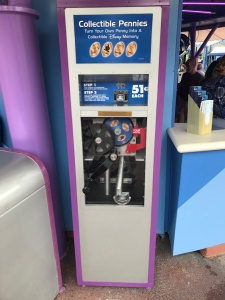 In the pictures above the machine on the left is the “before” and the machine on the right is the “after”.  You can see the cabinet has been changed slightly.  It has some new graphics, no longer has the coin slider since the machine supplies the pennies now, and also has been given a credit card component.  The 4 penny designs have not changed: Phineas & Ferb playing guitars, Spaceship Earth with a Goofy Hat, Agent P, and Duffy the Disney Bear.

If you walk to the opposite side of the Pin Stand you can find the second machine available here.  Left is before and the right picture is after the conversion.  As with all these machines, the images have not changed. 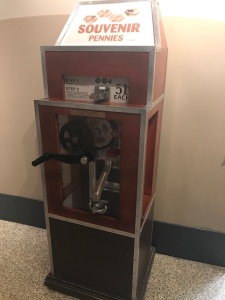 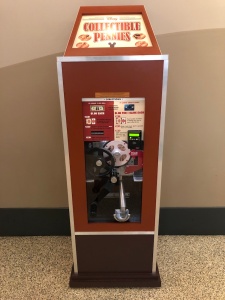 Next, I headed over to the Land Pavilion in Future World (soon to be part of World Nature after Epcot’s renovations).  Inside the Land Pavilion is where you would find the main attraction Soarin’, as well as the Living with the Land attraction where you take a boat ride through a greenhouse.  Once inside the pavilion on the lower level is the Sunshine Season’s food court area and is where you can find the above penny machine. 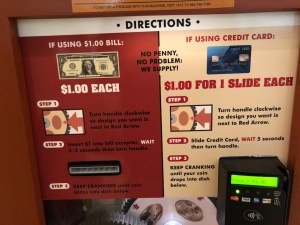 I included a close up of the new usage details that are located on the front of the machine.  Due to the machine supplying the penny after payment is made there is a slightly different method of use.  Not much has changed, but you do need to “take your take” and don’t just start cranking the handle after you insert payment.  You do need to give it a few extra seconds to load the penny in place or your end result will be a mis-rolled coin. 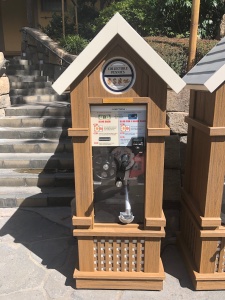 We will be back to finish off Future World in a little bit, but for now, I headed into the World Showcase and my first stop was the Japan Pavilion.  The first machine here has been moved towards the back of the pavilion after it’s conversion.  This makes it easy to find and is now right next to the second machine. 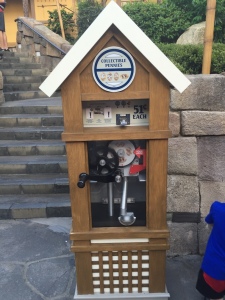 It was nice to see that these unique cabinets have been kept the same other than the new instructions and payment methods.  I always like the way these looked and they fit into the pavilion nicely. 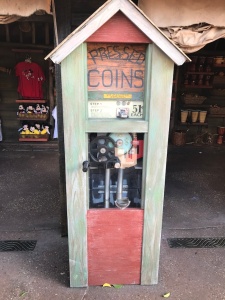 After the Japan pavilion, we had a bit of a trek through a few other Countries until we eventually found the African Outpost.  This is not a full pavilion but has a unique store and also a tent with a very talented woodcarver working on various pieces for purchase.  I’ve spent lots of time just watching him work as it’s really fascinating.  It was nice to see this cabinet get a bit of an update, there is now a marquee on the top with large images of the designs available in the machine that was not there previously. 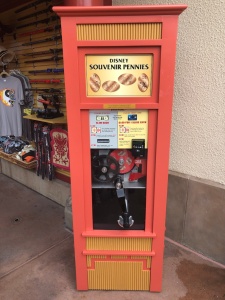 We were almost done with the World Showcase but had one Pavilion left to check out. I headed into the China Pavilion and found the first machine about halfway towards the back near an outdoor stand that was selling puppets.

The second machine is all the way in the back of the Pavilion.  It’s near the exit to the movie theater where you can see the Reflections of China video.  The cabinets are fun designs for these machines as well and look to have received a fresh coat of paint.

Initially, these were all the machines that had been converted to $1, but strangely there was still one other 4-design machine in the park that had remained unchanged.

It was located back in Future World at the Seas with Nemo and Friends attraction in the gift shop.  Above is a picture of the machine.  After some conversations with other collectors we figured it would be changed eventually but due to it being a combination cabinet that housed not just the penny machine, but also a quarter press and a change machine all in one.  This was probably a bit of a complex machine to upgrade.  I held off on writing this post for weeks hoping that the machine would be changed and I could put the completed stamp on this park but it seemed like months were passing by and it still hadn’t changed.  So I started to detail out all the other machines, and of course just as I was about to publish the post I visited the park one random evening and witnessed them putting the machine out and getting it setup.

As you can see the machine was split out from that massive combo design.  It now has a new stand-alone design, but the images are still the same.  I chatted with the wonderful tech that was working on the machine as I’ve met her a few times in the past.  She mentioned the quarter press has been removed completely along with the change machine.  This is a bit sad since I really like the pressed quarter machines since the coins are larger they have nicer final images pressed and the details are always more pronounced.  Thankfully there are still a few quarter press machines around the property so I just hope they don’t decide to start removing them.

You may have noticed from the above picture of the new penny machine that there appears to be another machine beside it.  I was going to gloss over it and hope you didn’t notice but it was kind of hard to hide it from.  In place of the removed quarter press, they did release a new 8-design penny press machine.  It wasn’t completely working when I visited to get the above pictures so I’ll be going back in the next few days to use the machine and get more details on it.  At that time I’ll write a separate post on the pennies available in that new set.

Where will the next set of machines be converted?  My guess is Hollywood Studios but there are also a few machines at Disney Springs and a couple at the resorts.  I’ll be making some extra trips to these locations over the next few weeks to try and keep everyone up to date on the changes.  Happy collecting!!