On the weekend I was heading to Busch Gardens in Tampa for a special event but along the way, I passed the MOSI (Museum of Science and Industry) near the park.  I always loved science museums as a kid and knew I wanted to bring my daughter back to try it out.  This past weekend we finally made it back and had a great time.

There would usually be plenty of parking in the back of the museum.  However, during our visit, there was a renaissance fair going on nearby that was sharing the museums parking so spots were pretty sparse.  After a short walk, we made it to the museum entrance.

Even outside the museum were some fun science experiments like one with a couple large satellite dishes allowing you to whisper on one side for your friend to hear 30 feet away. 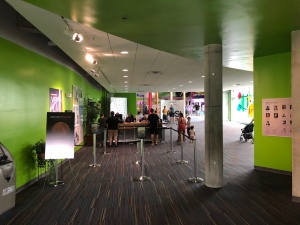 I will admit that the museum looks much larger from the outside.  Not to say it’s small, but I was thinking it may be more than one floor.  All the exhibits were spread out on the main floor that extended pretty far back.

The exhibits covered all sorts of different topics as they usually do.  At the very beginning was some info on the space program and even had a tire from one of the shuttles on display. 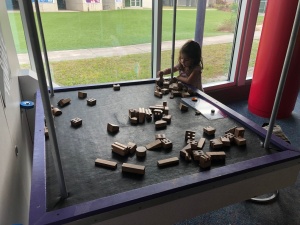 There was a hanging table that simulated seismic waves like an earthquake.  My daughter thought this was so much fun.  We would build a tower, then press the button and watch the table vibrate and our tower falls apart.

Another fun experiment was this tug of war contraption.  We watched a family pull on one side but couldn’t budge the one person holding the opposite end, due to all the pullies the rope was threaded through.  Ahh, science!

One area took me a bit by surprise as it had some dinosaur fossils, usually, I would think this more for a Natural History museum.  But there is science in all things so and I’m not complaining about being able to see some dinos.

Back in one corner of the museum was dedicated to hockey science.  They had displays showing all the different equipment the players wore and how it protects them against injuries.  Another display shows how they painted the lines on the ice and also how a Zamboni (the vehicle that cleans the ice) works. 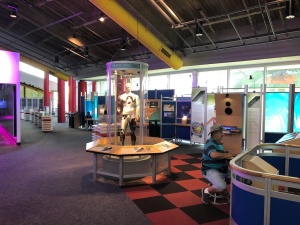 Each area wasn’t huge in size but there were so many different topics to explore that we did get to spend a good portion of our day playing with all the different experiments.

However, one area of the museum that kept drawing my daughter was the obstacle course outside.  This is located outside in the courtyard of the museum.  There is a harness that you get strapped into that is connected to the support beams as you make your way through the course.  This just ensures you don’t have any way to fall or get hurt.  My daughter was so excited to try it but only made it a little way up as I think she underestimated how high up she would go.  It was still a lot of fun and she has been talking about it ever since.

We eventually headed back inside and were ready to call it a day.  Towards the entrance of the museum just past the admission desk, there was a wall of vending machines.  My daughter immediately headed to the Dippin’ Dots machine for some “ice cream of the future” as it’s labeled.  After she had her snack I used the pressed penny machine right beside it. 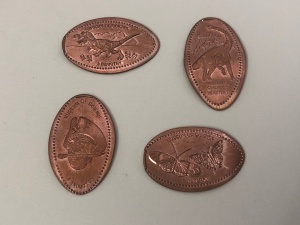 Each penny says the Museum of Science and Industry on it along with images of a T-Rex, a Sauropod, a Pirate and some Butterflies.

This museum had plenty for us to do and we will definitely be back for more fun.  They mentioned that new traveling exhibits come in and out all year long so we will keep an eye out for future visits.

One thing I thought of after we had left was about the penny machine and how they should make an exhibit out of it.  They could demonstrate the amount of pressure needed to squashed the coin, and how the gears work to allow us to create so much crushing power with so little arm strength.  I’ll have to submit a suggestion the next time we visit!  Happy collecting.