Back in 2009 a little movie you may have heard of called Avatar was released and became the highest grossing movie of all time with over $2.7 billion at the Box office.  The movie takes place in the mid-22nd century on a habitable moon called Pandora in a far away star system.  The moon was inhabited by a local tribe called the Na’vi that were tall blue creatures.  The moon also had a diverse collection of other creatures both tame and hostile.

With such a popular and highly profitable movie it seemed only a matter of time before more movies would come out.  However before those new movies come out (we are still waiting) Disney announced they were going to develop part of the Animal Kingdom park into Pandora.

Construction began in early 2014 and was going to be a huge expansion.  Then on May 27, 2017 the new land officially opened to the public with two marquee attractions that to this day still have up wards of 2-3 hour wait times to ride.

I was not there on opening day, but did get to first experience Pandora about a month after it opened and was just completely blown away.  As you walk over the bridge into Pandora the sounds of the Animal Kingdom slowly fade and new ambient sounds are heard instead.   I remember just wondering around for a couple of hours taking in all the details of Pandora.

I had a fastpass to ride the slow-moving water attraction called Na’vi River Journey, and eventually was able to experience the highly coveted Flight of Passage which is really amazing and I would do it no justice trying to explain what it is like.  But one thing that caught me a bit by surprise was that there was no pressed penny machine to be found anywhere.  I guess maybe the Na’vi don’t use money so that could be keeping with the theming, but was something many collectors hoped would show up at some point.  Well that day finally showed up almost 2 years after Pandora opened.

I was at work when I heard the news about this new machine.  I did the responsible thing and waited until the work day was over before taking my two daughters with me to Animal Kingdom on the hunt for the new pennies.

The floating mountains are always a sight to see and things keep changing in the land.  Plus the crowds are still as busy as ever.  They even have a cast member in a utility suit (for the science team) come out and walk around giving some history and detail on the world we are visiting.  It’s all done in character but still a lot of fun and helps keep you immersed in this amazing place.

There is only one gift shop in Pandora that is called Windtraders.  If you experience the Flight of Passage ride you actually exit through this gift shop.  But you do not need to go on the ride to check it out.  Inside there is a rookery where you can be matched with your very own Banshee, or be scanned into a computer and have a 3-D Na’vi toy created of yourself.  Plus of course lots of t-shirts, magic bands, and toys. 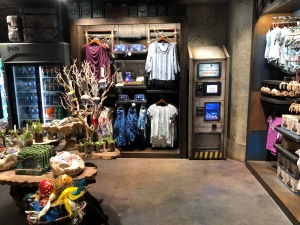 Then all the way in the back corner that blends in almost too well is the penny press machine.

This is another of those 8-design touch screen machines that supplies the penny sized tokens to press.  There was a line of about 5-6 people in front of me when we found it so this will probably be another very popular set of coins. 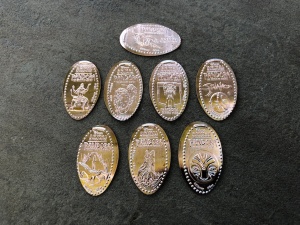 The set includes various designs from the two attractions in Pandora and the land itself including the Shaman, Viperwolf and even the Utility suit plus some other things I’m not 100% sure what they are but they look cool which is important.  Each of the coins also say Pandora the World of Avatar.

I’m so glad to see they finally released as set of coins for this area of the park.  Not sure exactly why it took so long, but I’m sure there is all sorts of licensing legalities that need to be ironed out before they can release them.  Hopefully with the new Star Wars Land….sorry Galaxy’s Edge, that we will get some new machines and maybe you will even need a droid to start it up.  We’ve waited long enough for the Star Wars area to open, hopefully they don’t make us wait until 2 years after that for some new pressed pennies.