Quick side note.  The below is something I wrote up earlier in December but just didn’t get a chance to post it.  I had planned on writing something else for this week, BUT Walt Disney World decided this was the week they were going to release all their new 2019 pennies and quarters.  So all week I’ve been heading in and out of the parks and resorts looking for the coins.  Full review will be coming as soon as I can.   In the meantime enjoy the below even though it’s a bit late in celebrating the holidays.
Have a wonderful 2019!!
————————————

Still being relatively new Floridians, my family is still finding it hard to get into the Holiday spirit.  Coming from New Jersey we had the transition from summer into fall with the changing of the leaves and cooler weather, then into winter with lots of snow.  But now in Florida it pretty much seems like summertime all year round.  There are some things we have found that help, but our favorite has been the Festival of the Holidays and Candlelight Procession in Epcot. 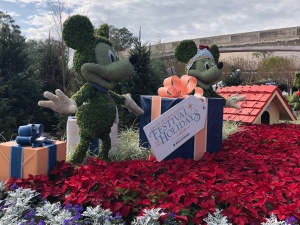 The decorations around the park are always a nice touch, and the topiary that are common for each festival in Epcot are always really amazing. 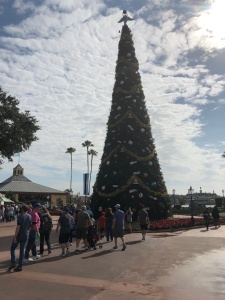 As you head through the middle of Future World you can see the top of the Christmas tree just near the entrance to World Showcase.

You always want to make sure you pick up the passport for the Festival.  This will contain information about the different Holiday storytellers, show times, and most importantly the food booths. 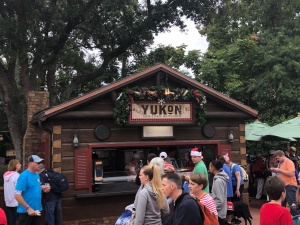 We checked out a few of the booths this year.  One we always visit is near the Canadian Pavilion and this year is called the Yukon.

We tried the French Canadian classic tourtiere which is like a meat pie filled with Beef and Pork with a housemate ketchup.  To offset the savory dish we tried some Ice wine from a winery called Inniskillin located in the Niagara Falls region of Canada.  The tourtiere had the familiar holiday spice and flavor I remember from my childhood in Canada and it was a nice treat.

There is also a cookie stroll you can partake in.  There are six cookies available at specific food booths around the World Showcase.  The cookies were only a few dollars each.  When you purchase your cookie, make sure they stamp your festival passport.  Once you have had all your cookies there is one last Completer cookie to get which is accompanied by a cold bottle of milk. 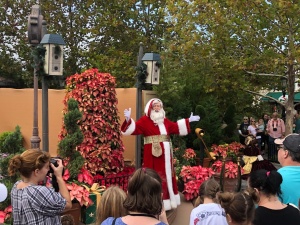 I mentioned previously about the Holiday Storytellers.  These are done by performers in some of the pavilions that tell stories or sing songs about the holiday celebrations from their home countries.  We headed to France and loved the stories told by Père Noël. 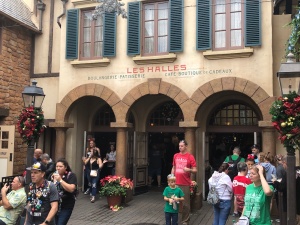 As a side story this our Holiday adventure through Epcot, I had heard a rumor that the pressed penny machine in the France Pavilion had returned.  So I took a quick trip into Les Halles the gift shop and patisserie to check it out. 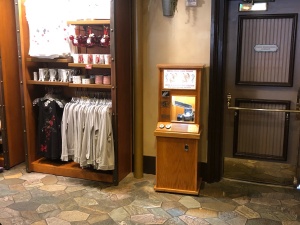 Sure enough in the back of the shop where it used to be was the machine.  The cabinet has changed but the two designs were still the same. 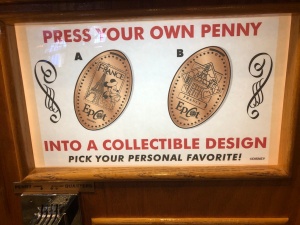 The two designs are of Mickey with the Eiffel Tower, and the France Pavilion. 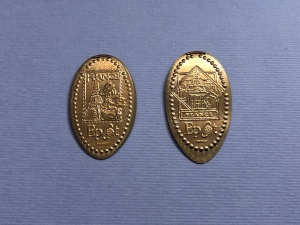 Now if you have been following my travels there was a post a year or so ago about a secret penny that was available here in the France Pavilion.  You can read about it here.

As I pressed a new set of pennies at this machine I watched the dies inside the machine turn and noticed the third secret die was still inside.  I was hoping this would mean that the Agent P interactive game that you used to play to get this coin would be reactivated.  However after chatting with some fellow collectors online the rumors are that the Agent P game will be going away in the near future and replaced with something else.  So unfortunately for now it appears there is no way to press this special coin.

After visiting the patisserie in Les Halles for my wife’s favorite chocolate croissants we headed to one last Festival food booth for a couple of items that we had been hearing good things about.

At the L’Chaim! booth there was quite a line which seemed to be a good sign.

First we tried the potato knish which I remember having in New York City on many visits.  This wasn’t as good as the authentic ones in NYC, but it was still really good.

The second items we tried at this booth was the Pastrami on Rye with a housemate picket.  This was really good.  I’m a sucker for Pastrami or Corned beef and really like this one.  I did with the portion was larger, but this is pretty standard size for the Epcot festivals.

We enjoyed the rest of the Festival around the World Showcase and eventually ended up in the China Pavilion at Nine Dragons restaurant for dinner.  We had booked a dining package for the Candlelight Processional that evening.  After dinner we headed towards the American Pavilion for the show and it was amazing. Our celebrity narrator was Neil Patrick Harris, but the stars of the show were the orchestra and choir.  The music and singing were really fantastic.

On our way out of the park after the candlelight procession I overhear someone say, “If that doesn’t get you in the Holiday spirit nothing will”.  I couldn’t agree more.