Just this past weekend we have news of a new penny machine.  I was surprised by this as I figured Disney was preparing to release the new 2019 dates sets which usually happens around this time of yer.  But instead we were given an early Christmas gift with a new machine. 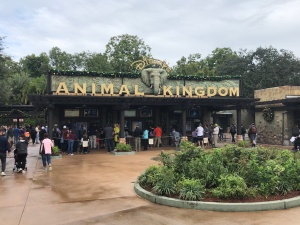 The machine was released over at the Animal Kingdom park.  There are some holiday decorations up but the other parks are definitely more decked out.

The huge tree is just past the security check at the front of the park, but before the ticket windows.  There are quite a few photo pass photographers around the tree offering to take your picture.

If only they had a way to get some lights up in the Tree of Life that would be really cool.  They do have a projection show on the trunk of the tree at night, but from what I remember it’s not holiday themed this time of year.

When you enter the park and cross over the bridge to see the big Tree of Life in front of you, there is a store on your right hand side called the Riverside Depot.  This is connected to the Discovery Trading Co. store which already has three penny machines.

Discovery Trading Co is more t-shirts, sweaters and other apparel you can wear.  The Riverside Depot however is where you can get some plush characters, holiday ornaments, candy, pins for pin trading, and a wide selection of items.

Towards the back of the store is the new and only penny machine in the Riverside Depot.  As you can see from the above picture it a 8-design multi machine. 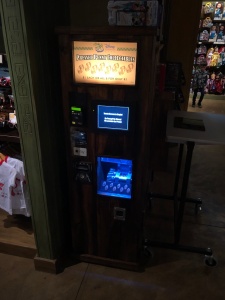 This is the first machine of this style located in the Animal Kingdom, but I’m sure it won’t be the last.

A nice feature of this machine is that a portion of the purchase amount goes towards the Disney Conservation Fund. 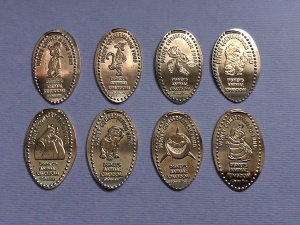 This set has some of your favorite Disney animal characters from  various movies.  The designs include Abu from Aladdin, Tigger from Winnie the Pooh, Squirt from Finding Nemo/Dory, Terk from Tarzan, Rhino Guard from Robin Hood, Hathi Jr from The Jungle Book, Bruce from Finding Nemo, and Heimlich from A Bug’s Life.

Another great set of designs.  I especially like the Rhino Guard from Robin Hood.  That is one of my all-time favorite Disney movies as it’s one of the few videos we had on tape that my sister and I would watch endlessly.  If only they would release some of the other characters like Robin, Little John, Maid Marian, the Sheriff.  Oh I could go on, that would be a great set but maybe someday my wish will come true.  Stay tuned for next week as I have something a little unique setup for Christmas.  For anyone traveling this coming week please stay safe.