Earlier this year during a quick trip down to Florida before our move I had a whirlwind tour of Universal Studios and Islands of Adventure.  I was short on time so I tried to visit both parks in one day (really just part of the day) and document all the pressed penny machines.  It had been awhile since my previous visit so there were a lot of machines to find, and it gave me a chance to replace some old pennies with some new ones.  You can read all about that visit here.

But during that trip there were a couple of machines that were either not working or not available during that trip.  This past weekend I decided to revisit those parks and see if those missing machines were now available.  First up I headed to Universal Studios and just inside the main gate was the flagship gift shop. 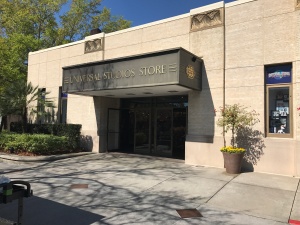 The Studio store has a total of five penny machines inside.  I was able to get four of them on my last trip but missed a four design manual machine.  I’m not sure if it was actually off stage or if I just somehow walked past it.  There is an area of this store that is like a candy shop and this machine is found just beside it.

I found the machine almost immediately after walking inside the store.  It was working perfectly and pressed the designs nicely.

Minions definitely seem to be the favored characters as they are everywhere including quite a few of their penny machines.  This is a another cute set of these mumbling yellow sidekicks.

This was the only machine I had missed at Universal Studios, but as I checked around to make sure none of the other machines had changed I found a Hello Kitty 8-Design machine in the Betty Boob Silver Screen Collectibles store.  I wrote about this new machine previously and you can check it out here.  After I checked out the rest of the park all the other machines were still in the same place with the same designs.  So if was only a quick Hogwarts Express Train Ride over to Islands of Adventure.

As with the Studios I had done a pretty good job on my first go around and didn’t miss many machines.  There was really only one I knew about and it was by the Amazing Spider-Man attraction.

The reason I missed this the last time was I was told the machine was located in the queue for the attraction.  The wait time for this ride was pretty crazy and with my tight schedule I just couldn’t spend the time inline.  However, on this most recent trip the machine was now located inside the Spider-Man gift shop. 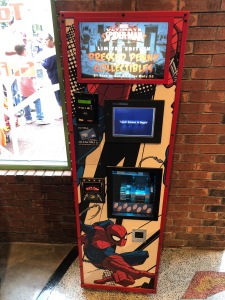 This was an 8-Design penny machine with a really colorful cabinet with Spider-Man all over it.  It’s right near the exit to the gift shop so you can’t miss it.

This set includes four different designs of Spider-Man in various poses.  The other four designs include Doc Ock, Green Goblin, Venom and Power Man.  With this new set packed away and I headed across the walkway to the Marvel Alterniverse store.  Previously this store had two penny machines one was themed around the Hulk, and the other around the X-Men.  The Hulk machine was moved out to the North Parking Garage, but the X-Men machine was gone at this time.  In their place at the Alterniverse store was another 8-Design penny machine.

This machine had a pretty plain cabinet with the marquee just having a standard Universal Orlando logo on it.

Of course since this was located in a Marvel gift shop it was a pretty safe bet that these coins would have superheroes all over them.  This was a numbered set that included each of the Avengers: Spider-Man, Iron Man, Hulk, Captain America, Thor, Black Panther, Vision, and Black Widow.

I took my time finishing my review of the machines in Islands of Adventure and confirmed that the rest of the machines were all in the same locations with the same designs.  It seems that the machines here don’t change as frequently as in the Disney parks, but they do seem to change more often than I had assumed.  I upgraded my ticket to an annual pass for this year so I can try to visit more often as these are great parks that I just don’t usually get around to visiting as often.  I’m going to keep checking back on them to see if anything changes and will be sure to share the news.