It’s been a few months since our move down to Florida, the moving boxes have all been put away and we are getting comfortable with our new surroundings.  We have taken little adventures around our area to try to get familiarized with our locale, and of course finding new doctors and a vet for our cats is always an adventure.  My wife and I both work for the same company and they allowed us to continue working remotely from our home after the move which was a big help.  But spending so much time in the same house can drive you a little batty.  With our two young daughters, getting some time just to ourselves can be a bit of challenge.  We decided as a lot of couples do to start having date nights every so often so we can just get out of the house for a few hours. 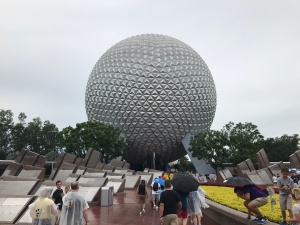 With so many options it can be a little daunting to figure out where to go.  We had recently visited Epcot and I saw a restaurant I hadn’t been to in years so I checked the myDisneyExperience smart phone app and was able to get a reservation for about 7pm.  Before that we did have some time to waste so I grabbed a fastness for one of our favorite attractions.

The new Soarin’ around the World movie is a nice update.  I was really hoping to get a purely Florida version but flying over the Great Wall of China, and the Eiffel tower is still a pretty cool experience.  Once we were done with Soarin’ we headed outside so we could make sure we arrived in plenty of time for our reservation. 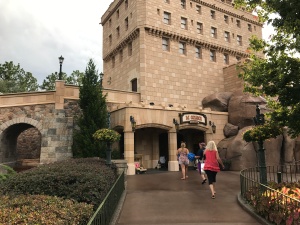 I was originally born in Canada so the Canadian Pavilion was always a stop my family would make on vacations when I was young.  In the lower area of the Pavilion is the very popular Le Cellier steakhouse.  You could try just walking up for a table but be prepared to wait.  Reservations would be highly recommended to ensure you get a table. 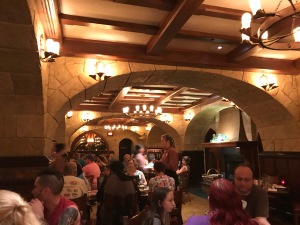 As the name suggests the restaurant is themed like you are in a Wine Cellar.  It’s a little dark inside and usually very noisy, but on this trip it was still dark but actually kind of relaxing inside.  Even though we were only two for dinner, we were sat at a larger table for four.  This allowed us to spread out a bit as some of the Disney restaurants do crowd you in together with all the other guests.

For an appetizer my wife and I split a Canadian favorite poutine.  This has become quite the phenomenon in a lot of areas through the US with each place putting a bit of a spin on it.  The classic is french fries, covered with a thick beef gravy and squeaky cheese curds (yes squeaky that’s how you know they are authentic).  The version we had this time was called the Montreal Poutine.  It included fresh-cut french fries, Montreal style smoked brisket, french onion gravy, Gruyère cheese with a mustard cheese sauce.  This far from a classic version but was very tasty.  The brisket was also nice, but was layered on top in long slices which made it a little difficult to each with the fries.  I would have preferred it was cubed up and mixed in a little better, but still very nice. 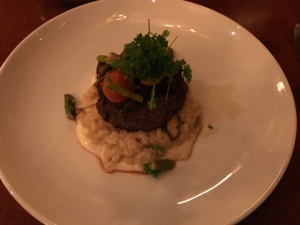 For our main course we both got the Signature Filet Mignon, which was a AAA Canadian Tenderloin, Mushroom Risotto, Asparagus-Tomato relish and a Truffle Butter sauce.  I’m not a big mushroom fan but this was really tender and fantastic.  For dessert my wife got the Maple Creme Brûlée, and I tried their Maple Sugar-Pecan Doughnuts with a Coffee mousse.  The doughnuts were okay, but my wife’s Creme Brûlée was definitely the winner.  With our wonderful meal complete we headed outside.

The Canadian Pavilion at night when it’s all lit up is really pretty.  The native decorations and totem poles are a nice touch as well giving some details on the rich history of the country and its people. 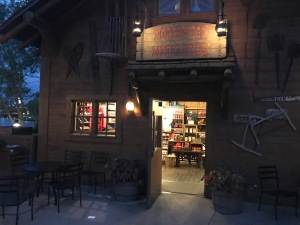 Of course there is also a gift shop located here called the Northwest Mercantile.  These gifts shops around the world showcase are fun to walk through as they have items directly from those countries.  Inside the mercantile I saw candy and other items that I haven’t seen since my last trip to visit family in Canada.

I always like to talk with the cast members working in these stores as they are usually on the college program and are from the country you are visiting.  I visited with Nick who was from the Toronto area and chatted about how my father’s side of the family were all from that area.  It always makes the world seem just a little bit smaller. 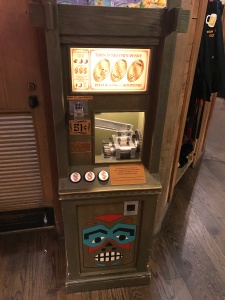 Tucked away in the back by all the shirts and sweaters is a penny machine.  There is some native decoration on the cabinet which was cool.

The machine was electric and pressed three designs The Canadian Pavilion, Mickey wearing a Mountie Hat, and Canada Duffy Bear.  As we continued looking through the gift shop we hear an announcement from outside in the park that the fireworks show would be starting shortly. 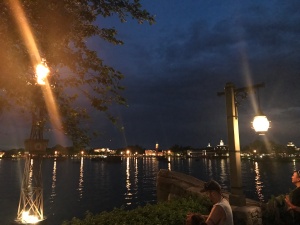 Thankfully the park was actually not that busy and we were able to just walk right up to the fence surrounding water where the show takes place.  It’s called IllumiNations: Reflections of Earth, and is a Fireworks and laser show.

Some of the show pieces move around on the water, and the lasers  can be seen from all around the showcase.  The fireworks are some of the best on property.

This was a great way to end our date night, and we had a great time just spending some time together at the park.  Dinner was great and of course I was still able to squeeze in a penny machine.  Now I just have to figure out where we are going next.