A year and a half ago I visited my very first Madame Tussauds Wax Museum in New York and was both intrigued by it and creeped out at the same time.  You can read out it here.  After moving down to the Orlando area my family has spent most weekend over at the Disney parks as we just feel like we are on vacation.  But as I truly hate to say this, after a while we wanted to do something else (gasp!).

One weekend I had dropped my mother in law off at the Florida Mall so she could get out of the house and do some shopping.  I had already exhausted that mall and wasn’t interesting in spending more time in there.  Instead I headed over towards International Drive and hit the jackpot.  From a distance I could see this huge ferris wheel type attraction and that just drew me towards it.  It’s known as the Coca-Cola Orlando Eye but more on that in another post as that was the finally to this little side adventure.  This road side attraction area was called the I Drive 360.

After parking in the lot (free parking by the way) I entered the building and came into a huge lobby type area with quite the assortment of things to do.  I first came across Madame Tussauds near the entrance so that’s what I headed into first.

Of course there is an entrance fee but they do have a free wax celebrity outside that you can pose with for free.  I couldn’t resist the draw of this place so I paid for a ticket and headed in.  There are the standard figures of Presidents and historical figures, but this location had a few I didn’t find in New York which I guess is due to their Florida connection.

The lady of honor herself, Madame Tussaud in the process of creating a wax figure.

Stephen Spielberg, I’m guess due to his relationship with Universal Studios?!?!  Sure sounds good to me.

Steve Jobs.  Now this could be due to his popularity with many Apple fans, but I liked to think it was due to his contribution with starting Pixar Animation. 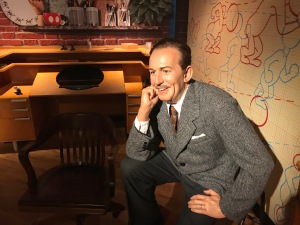 Of course how could they not include Walt Disney.  This was a very busy figure with lots of people crowding around to get a selfie.  It was very cool to see a lot of different celebrities from the one I visited in New York.  As with the other location once I was done with the exhibits I found myself in the gift shop.  I figured I had spent enough money on the entrance ticket that I didn’t need any souvenirs but did spot one that was inexpensive and right up my alley. 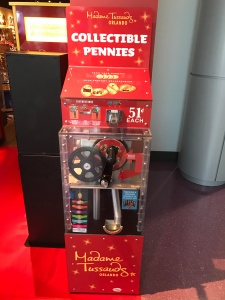 Thankfully I always come with a pocket full of change for just these types of situations.  There were four designs available in this hand crank machine.

The pennies pressed nicely and had images of Madame Tussauds Orlando, an Astronaut, Orlando U.S.A., and a Movie Clapperboard.  All the designs did have the Madame Tussauds logo and I always like when these attraction chains have the city on the coins.  It helps make each set of coins a little unique, and fun to collect each location.

Now I will let you know that this machine is available just outside the gift shop so you do not need to pay the admission cost to use the machine.  But if you have the time I would recommend it as it’s a unique experience and a fun way to make your friends jealous of the celebrity sightings you had on your vacation.