I’ve mentioned in the past that I used to live in New Jersey, and was about an hour away from New York City.  We had some of the best pizza places around, and yet after moving down to Florida finding good pizza can be a little challenging.  Then thrown in Disney Theme park pizza and it’s really not very good.  Of course there are a few shining places like Via Napoli in the Italy Pavilion at Epcot, and I will admit I like the new Blaze Fast-Fire’d Pizza at Disney Springs.

I remember a few years ago visiting Hollywood Studios and was looking for some penny machines that were located near the Muppet Courtyard in a quick service restaurant called Pizza Planet.  This was an homage to the restaurant and specifically delivery truck found in most Pixar movies as an easter egg.  I grabbed a small personal pizza as a snack and don’t think I ate more than a slice, it was just you not very good.  I’m not really a pizza snob and have eaten and enjoyed a lot of crappy pizza, but this just didn’t do it for me.  Fast forward a few years and I hear the rumors that Pizza Planet is closing for a Muppet’s Themed restaurant and I get intrigued…until I hear that it’s another pizza place. 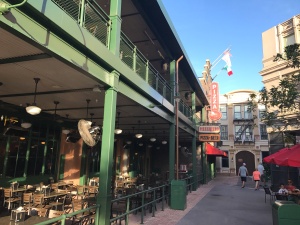 The quick service restaurant was named PizzeRizzo after the Rat from the Muppets.  As you can probably guess I was just got in any rush to try this pizza, so I have avoided it since it had opened.  However that all recently changed when I saw online that two new penny machines were placed inside this restaurant so I figured I may as well check it out.

There are two floors with a lot of tables and seating throughout.  It’s decor on the main bottom floor looks like it’s straight out of a classic New York Pizzeria.

Just inside the set of doors roughly in the middle of the restaurant is where the first penny machine was found.

The designs included a nice image of the PizzeRizzo Logo with the famous Rat himself, Syndrome from The Incredibles and Anna & Elsa from Frozen.  The last two coins used to be located at another store in Hollywood Studios but had been removed a year or so ago.

The ordering area is pretty spacious to accommodate large crowds which undoubtably pack in here during busy times of the day. 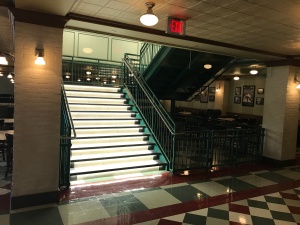 The large stair case leads you upstairs to the second floor which is just more seating. 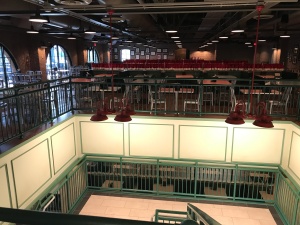 There was also access to the outdoor balcony area with more tables.  But with the heat in Florida lately you’d have to be crazy to sit out here and enjoy your lunch.

Back inside there is a separate area themed like a gaudy New York wedding ballroom.  The blue seems like it would get annoying after a while and mess up your rods and cones in your eyeballs.

Near the doors that take you out on the balcony is where the second penny machine was situated.

This machine seemed a little out-of-place.  The cabinet was nice but the designs just didn’t make sense in this Muppet themed restaurant.  The designs included an old one that has come back The Walt Disney Studios Logo, and two new ones of Tinker Bell, and Stitch playing in the sand.

There were some interesting caricatures on the wall, and even the trash can seemed to have a little New York attitude. 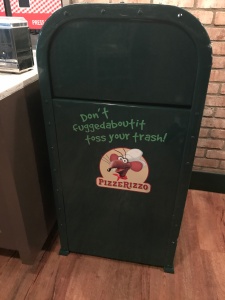 After I had finished walking around the entire restaurant I decided it was time to head out.  But what about the Pizza?  I am sorry to say that I really did plan on eating here, and had heard the pizza was better than its predecessor.  However as you can see from all the pictures above this place was completely deserted and not operational on this day.  I don’t know why, maybe it was in-between lunch and dinner service but this seems like a place that would pretty much be open all day.  I went around 6pm and would have thought that’s prime time dinner service, but it was not serving any food.

A friend of mine had eaten there previously and said it was much better than Pizza Planet but I’m not sure if that’s really an earth shattering review.  Above is a picture of the new pizza and tiny side salad.  I will make sure that I try this at some point in the future, but to be honest the picture isn’t making me rush over there any time soon.

Either way I’m not here as a food critic and you should always be sure to enjoy whatever food you like.  I’ll stick to collecting pressed coins and try to keep you up to date on new machines, and can always snack on Churros and Dole Whip.