When my wife and I first got married we were in the middle of buying a new house, and having a our first child so we didn’t get to have a honeymoon.  We had always planned on taking a honeymoon at some point but kept pushing it off.  Finally I decided it was time to do something and as if we don’t already get enough Disney fun, we booked a Disney Cruise to the Bahamas.

I’ll get into this a little more in a future post, but we arrived a day early for our cruise to Orlando so we could do some shopping for our new house (Spoiler) that we are having build in Florida.  We had a very early flight from Jersey to Orlando and spent the entire day shopping.  Even though we were pretty exhausted from the day I had booked a dinner reservation at Jiko which is a signature restaurant at the Animal Kingdom Lodge.  This was a place we have wanted to try in the past, and today was the day to go and we weren’t going to miss it.

I’ve said it before but this is really am amazing resort to visit.  We haven’t stayed here yet, but have visited a few times during a down day just to walk around.  It’s really a treat for the senses when you come to visit this resort.

Of course there are the Savannah’s towards the back of the resort that let some of your favorite exotic animals roam around.  Some like the giraffes have feeding times you can go and watch or help with if you are lucky enough.

We were running a little late for our reservation, and the maps for this resort can be a little confusing.  But after heading outside by the pool, then back inside we eventually found Jiko. 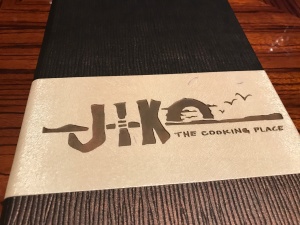 Jiko stands for The Cooking Place which is a central location where people would gather to enjoy each others company and community dining.  In the middle of this restaurant is a cool area you can sit at a high bar type table and watch the chefs create the starter courses available on the menu. 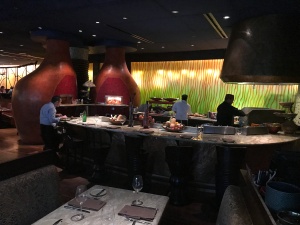 We were seated at a table towards the back in a nice quiet area.  The wait staff was very attentive and explained all about Jiko, the decorations and art inside, the cooking styles and always wanted to ensure all our questions were answered.  For a started we decided to try the Taste of Africa. 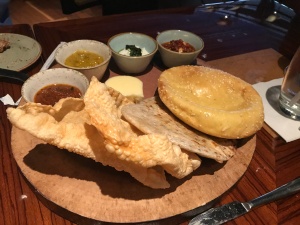 This was a similar bread and dip sampler to what we had a few months ago a Sanaa also located in the Animal Kingdom.  However this one had fewer options but was still very good.  It included unique “breads” like Pappadum, Sesame Fatir, Flax-Seed Naan, and also came with a variety of African inspired dips.

For my main course I went with the 7 oz oak-grilled filet that I had heard a lot of good things about.  It was service over top of bobotie mac and cheese, asparagus, and a South African red wine sauce.  The spices used on the steak and in the mac and cheese were from a different spice palette than what I’m used to but was a nice change and very unique and tasty.

My wife had a Moroccan Lamb Tagine which was basically a huge lamb shank with parsnip and root spinach.  It was fall apart tender and very juicy but a huge portion which would have been difficult for most to finish in one sitting.  We were offered dessert but were so stuffed by that time that we chose to pass (Yikes!).  Instead of just heading right back out to our card we decided to try to walk off a bit of our dinner by wandering around the resort a bit.  Just outside Jiko towards the main pool we ran into the quick service cafeteria style eatery called The Mara.

As with all the other resorts this place includes various stations with different types of food at each.  Your standard flatbread pizzas, salads, and chicken nuggets are all available here.  We went inside to get a small dessert I had heard about called Zebra Domes.

So what exactly is a zebra dome?  Well the explanation is as follows: An Amarula cream liquor mousse covered with a panna cotta like white chocolate, drizzled with chocolate stripes and chocolate shavings.  These come in a nice to-go package of four so you can snack on them as you walk.  Please note that these do have liquor in them so you may want to avoid letting your little ones try them.  I believe they do offer non-alcoholic versions but didn’t see any when I was there.  Before heading back outside I found two coin press machines just near the main set of doors.

Right next to the penny machine was a second machine that had one quarter design available.  This machine would press an image of Pumbaa and Simba from the Lion King with the Animal Kingdom Lodge logo on it.  We headed back outside and just a short walk away found the next stop.

Pumbaa’s Fun & Games is the resorts arcade.  It has your standard air hockey table, and classic arcade games.  Just outside the door to the arcade was the third coin press machine at this resort.

The cabinet design on this machine was really fun and reminded me of the machines they have over at the Animal Kingdom theme park.  This machine also had three designs which included Safari Mickey, Safari Minnie, and Mike from Monsters, Inc.

By this time our long day had finally caught up to us and we were ready to head back for some sleep before our cruise started the next day.  The Animal Kingdom Lodge is a bit out of the way, and if you don’t have a rental car may be tough to get too on the Disney bus system.  But it is doable (I’ve done it in the past) and is well worth the trip over to experience it in person.  Don’t forget to get the pennies located here, and with the layout of the resort can be like a treasure hunt to find them.  Happy hunting!