On a recent very quick trip down to Orlando I made sure to take a stroll down Disney Springs to see the ongoing changes there.  Even just from my last visit in November there had been some new opening like the overhauled Planet Hollywood, and The Edison restaurant is coming along nicely.  But on this trip I was really here to get some pennies.  I was about to say new pennies but these have been around for a while just not in a place that was easily accessible.

Disney Quest is one of the few places on Disney Property I have never actually experienced or even gone inside.  For those of you that don’t know it’s basically a large Arcade with all different types of interactive games, classic arcade style games, Virtual Reality (VR) experiences and supposedly more.  This place never really interested me and with the fairly high entrance cost was always what kept me away.  The downside for my obsessive pressed penny collection is that two machines were placed inside on the third floor a few years ago.  You were only allowed inside if you paid the entrance fee which I just couldn’t justify.  Recently I had heard that these two machines were moved down to their lobby so I could finally get a chance to use them.  However, when I got there and walked in there were no machines.  I couldn’t believe it, my online community had been wrong for once.  After spinning around a few times to make sure I didn’t miss them I decided to walk next door to the Disney Quest Emporium.

Boom, right inside the doors were the two machines I was looking for.  Check these beauties out, as I’m hoping you recognize them from the Wreck-It Ralph movie.  Really cool theming.

Machine number one on the right has images of the Wreck-It Ralph Logo, Fix It Felix Jr, and Sgt. Calhoun.

Machine number two on the left included images of Ralph, Vanellope, and King Candy.  After I walked outside I passed by the ticket window for Disney Quest and saw two more penny machines. 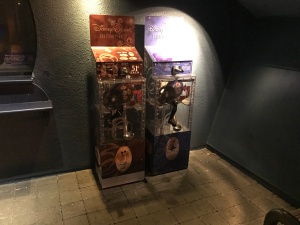 These two machines used to be inside the Disney Quest Emporium but were moved out here when the above Wreck-It Ralph machines were placed inside.  Hope that makes sense.

The machine on the left had designs of the Disney Quest Logo, Aladdin & Jasmine, Reclining Space Goofy, and Space Mickey.

The second machine shown on the right (in blue) had designs of Cyberspace Mountain Logo, Sorcerer’s Apprentice Mickey, a Pirate Skull, and another Disney Quest Logo.

Now please be aware if you are going to try to get any or all of these coins that you may only have a limited amount of time.  It was announced earlier this year that Disney Quest will be closing for good in July 2017.  The Wreck-It Ralph machines could just get placed somewhere else on property, but the other two machines have Disney Quest designs and I would doubt these will stick around after the closure.  Time is ticking so be sure to get these before they are gone.