The Wedding Day was finally here.  My brother-in-law’s sister was getting married and being the huge Disney fan that she is there was nowhere else in the world to get married.  But we had a few hours before the ceremony so we got up early and headed over to the Grand Floridian Resort for breakfast. 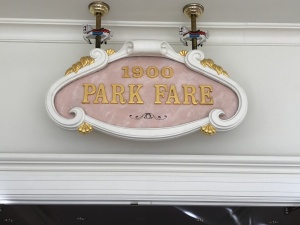 1900 Park Fare is located on the first floor of the resort and is a character breakfast buffet.  The characters we met included Marry Poppins, Winnie the Pooh, Tigger, and Alice.

The food was pretty standard and nothing overly exciting.  There was a kids area that had candy dispensers which Hanna enjoyed but who wouldn’t be excited about endless gummy bears.  After breakfast we headed over to the Wedding Pavilion which is right on the Grand Floridian property. 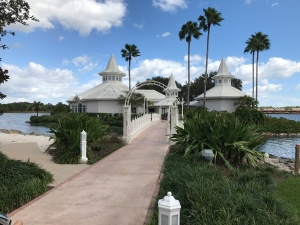 This really is a beautiful place to get married, and as you can see from the above picture the day they had was as perfect as anyone could have wished for.

Inside the area where the ceremony was held was decorated for a magical event.  It’s hard to see in this picture but the big window in the middle at the back where they exchanged vows looks right out towards the Magic Kingdom and Cinderella’s Castle.

Our niece Ava and nephew Luke were the flower girl and ring bearer.  How cute are they?  They did a great job and was a great way to star the ceremony.  The entire ceremony was really just like a fairy tale, and Disney had completely outdone themselves.  Before we knew it the vows had been exchanged, rings blessed, and we were outside ready to toss flower petals at the newlyweds.  Up next was the reception, and Disney did include a bus to transport everyone over, but since we had driven we just got back in our car. 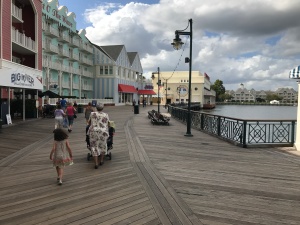 As luck would have it the reception was near the Boardwalk Resort which was right across from our resort.  We took the opportunity to walk along the Boardwalk towards the Dance Hall. 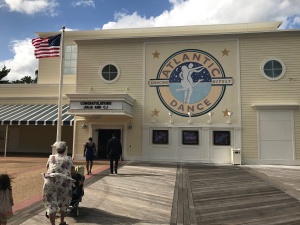 Inside is where the reception was held.  Our table assignments were designed like the old fashion paper fastpasses which I thought was a really cool touch.  The cocktail hour was very nice and we got to catch a glimpse at the cake.

Eventually it was time for the wedding party to make their grand entrance, and then the first dance, bride and father dance, and just a whole lot of fun.  The dinner was a buffet style which was nice, and the food was a nice assortment of options.  The dance hall was definitely rockin’ once the meal was over and the DJ was really fantastic.  I’m still not sure if he was from Disney or not but either way he did a really great job.  Before we knew it the festivities were coming to a conclusion.  As we left my parents headed back to their car to drive it around to our records, but I took the change to visit a few penny machines on the boardwalk.

The second machine had designs of Mickie in a Tux, Ariel, and Lilo with a doll.  We headed back outside to the boardwalk and found the next machine right along the waterfront.

This machine had 4 designs available and included images of Goofy juggling on a unicycle, Mickey with a Surrey Bike, Mickey as a Strongman, and Mickey & Minnie on the Boardwalk.  I’ve been on the boardwalk during the day and it’s nice, but it definitely gets interesting at night with a lot more going on.  A little further down the boardwalk was an ESPN Zone restaurant and bar.  I headed inside real quick as a machine is located just near the check-in desk.

The pennies at this machine all included the ESPN Club logo and had images of Football player Mickey, Donald twirling a Basketball, and Daisy swinging a bat.  The Boston Red Sox’s where in a close playoff game and the bar was getting a little crazy with fans so I headed back outside so we could finish making our way over to our resort.

This was a picture I took of our Beach Club resort from the Boardwalk.  The resorts really do come alive at night and this was just a really nice way to cap of a wonderful day.

The next was the our last full day of our trip.  We had scheduled to take it easy this day so we could be ready for the Halloween party at night in the Magic Kingdom.  For breakfast we headed back to the Polynesian Village Resort to meet up with my sister’s family at ‘Ohana.

The breakfast here includes characters and we were able to see Lilo, Stitch, Pluto, and Mickey.  The food was endless jumbo sized skilled filled with bacon, eggs, sausage and biscuits.  This sounds like a standard breakfast but for some reason it was really fantastic and I would definitely come back here again to start a day.  After we ate we all headed back to our resorts for some pool time, and naps in the afternoon.  By late afternoon we headed over to the Magic Kingdom for the party.

This is a special ticketed event that we had to set up ahead of time.  We had printed tickets for the entrance gate, but were given special wrist bands so the cast members knew who was allowed in after the park closed for non-party guests. 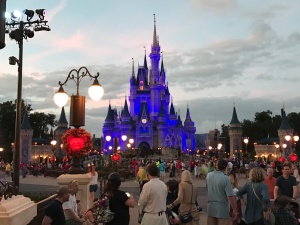 I posted this before but the castle was all lit up for Halloween and was really cool looking.  Our kids didn’t want to get into their costumes until we were in the park so it was about now that they decided to transform.

Hanna had recently coming interested in Sleeping Beauty after watching it a few times.  To be honest I think it’s just because the dress is pink, but she really got into it knowing that candy must be nearby.  Since we were allowed in a little early we had made dinner reservations over at the coveted Be Our Guest restaurant. 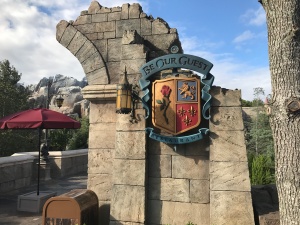 For dinner this restaurant is a standard table service setup where a wait staff comes to take your order.  For lunch there is touch screen kiosks to place your order.  We were seated in the darker West Wing room which is also where you find the famous rose with the falling petals.  We experience lunch the year before, and to be honest I think I preferred it.  The foods I had for dinner was okay but the sandwiches for lunch just seemed to be a lot more enjoyable.  For dessert make sure the “Try the Gray Stuff” and it was delicious.

After we were done eating we were escorted into a private room to visit with the Beast, and take some pictures.  With dinner done the Halloween party was just about to start.  We headed over to Adventureland so we could ride Pirates and check out the first of many trick or treating spots throughout the park. 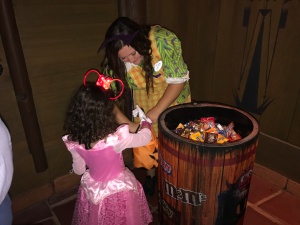 There was a bit of a line at most of these places but it moved pretty quickly, and the cast members were not shy about giving fistfuls of candy.  It only takes Hanna a few times to get the hang of it and was rushing us to each of the candy stops.  When we got over to Splash Mountain our niece Ava wanted to ride it.  My family didn’t want to go so I went with my sister, and brother-in-law and got a log all to ourselves. 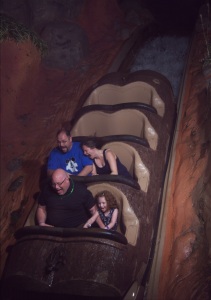 My sister and I were in the second row, and Ava was in the front enjoying every moment of the ride.  I’m holding out hope that my youngest Melody will go on this with me when she’s older.  My sister used to drag me on this when we were kids so it was kind of fund to have an updated picture.  Once we were soaked we met up with our family and had perfect timing for the start of the first parade.  We were pretty close and had a great view.  I’m a big fan of the Haunted Mansion so my favorite part of the parade was the Hitchhiking Ghosts.

The rest of the evening continued on with us getting as much candy as we could, and riding more attractions than usual.  The nice thing about this after hours party is that since there are only a limited number of tickets sold the crowds levels are much smaller and wait times for rides are really, really short.  Eventually we were over in Fantasyland to ride The Seven Dwarfs Mine Train again, and then a short walk to ride Dumbo. 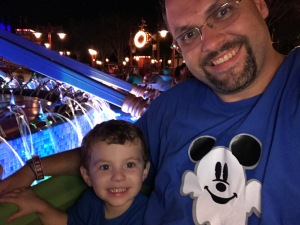 I got to ride with my nephew Luke who didn’t want it to end, and I was able to snag a quick selfie with him.  We got off the ride and my dad and I went to check out the Big Top Souvenirs shop.  My dad wanted to get one of the limited edition Halloween Party Magic Bands and I went to use the penny machine.

This is one of the few 4 design hand crank machines available in the Magic Kingdom.  The designs are all circus inspired and have images of Donald lifting a heavy weight, Minnie on the Trapeze, the Great Goofini, and Ringmaster Mickey.

Just as if we had planned it when we met back up with our group the fireworks started and we had a pretty good view area for the show.  When they were done there was still about an hour or so before the party was over, but our group was exhausted and already falling asleep.  We headed towards the front of the park, back to our car and eventually to our resort.

The next morning was our flight back to Jersey, and unfortunately back to reality.  It had been another wonderful vacation filled more amazing memories we won’t soon forget, and a whole lot of press coins to review.