This day’s schedule had us visiting the Animal Kingdom in the morning, but I had booked us a lunch reservation at the Animal Kingdom Lodge.  This was causing me some indigestion to try to figure out the best way for us to enjoy the park but still be able to make it over for lunch.  We decided to get to the park as early as possible so we had more than enough time to do everything we wanted.

Just after the security check point but before the actual entrance to the park is one of the multiple locations of the Rainforest Cafe that are available on property.

They serve breakfast at this location which I think is the only one that does so, but I just wanted to use the machines inside. 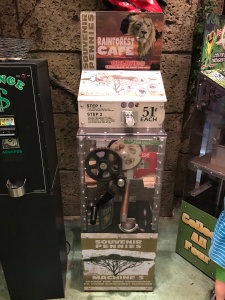 The first three machines are right inside the main entrance.  The machine on the left has pennies  with images of Maya the Jaguar, Cha Cha the Tree Frog, Iggy the Iguana, and Ozzie the Orangutan.  The second machine has designs including Bamba the Gorilla, Cha Cha the Tree Frog, a Mockingbird with Rio the Macaw, and Tuki the Baby Elephant.

The third machine near the entrance had images of an Alligator, a Mockingbird (Florida State Bird), a Crab, and Two Hot Air Balloons.  The last machine pressed on quarters and had images of an Orangutan, a Frog, a Fish, and a Butterfly all with Rainforest Cafe Orlando, FL included in the designs.  With all these coins collected I ran back outside and met us with my family.  Just as we were about to head into the park I noticed that we were in a perfect spot to catch a glimpse of the Floating Mountains soon to be revealed in the new “Avatar Land”, technically the actual name is Pandora: The World of Avatar.

Disney has announced that this new area of Animal Kingdom will open the Summer of 2017.  Not exact date has been officially announced and of course there are a ton of rumors.  But I will say I am really excited to check this brand new state of the art area once it’s open.  Next we headed straight back to the Tree of Life, watched the flying birds opening ceremony and immediately headed to DinoLand USA.  Hanna loves the TriceraTop Spin ride which is exactly like Dumbo just with Dinosaurs.  While they waited to get on I headed nearby to Chester & Hester’s Dino Treasures.

Unfortunately as you can see from the picture on the left above this machine was out-of-order when I visited.  This machine when working had another of the 2016 designs with Sorcerer’s Apprentice Mickey, an Iguanodon, and a Carnotaurus.  The second machine on the right was located outside the store and was in perfect working condition.  This machine had designs of Paleontologist Mickey, Terk, and Scar from The Lion King.  I got back to the Flying Dino ride just in time to see Hanna and my wife soaring through the sky.  When the ride was over Hanna insisted on going again.  There wasn’t much of a line so they hopped right back on.  This gave me another opportunity to check out a couple other nearby machines. 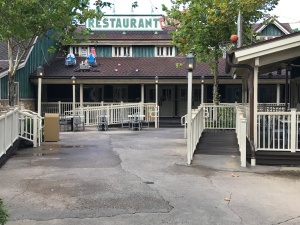 The Restaurantosaurus is a quick service location which some interesting menu options.  Right before you enter there is a penny machine on the front porch area.

This machine has three pennies available with images of Tarzan & Jane, Donald dressed like a Dinosaur, and a Dinosaur Fossil.  At this early in the morning this restaurant is not open, however the doors were unlocked and I knew there was another machine somewhere inside.  Once inside I found myself wondering straight into a staff meeting of cast members.  I apologized for interrupting and asked if they could point me in the direction of the penny machine.  They were more than happy to help and showed me where it was in one of the back dining areas among a bunch of tables. 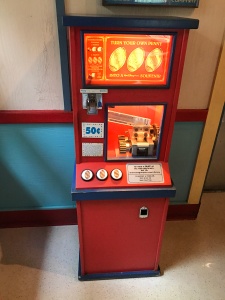 This was probably the most convenient time I could have used this machine since no one was in there eating.  But if you go during any other time of the day this area may be packed with people making this a little more difficult to access.  The pennies here included three separate images of Dinosaurs.  To be honest I have no idea what kind of Dino’s these are so I’m not even going to guess.  Here’s a close up of the marquee so you can see the designs.

My family all met up just outside this area of the DinoLand USA area and I noticed Hanna convinced her Grandparents she needed to have her face painted. 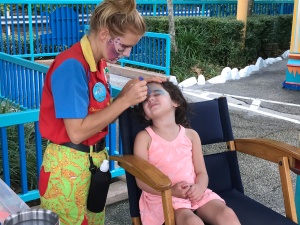 We then started off to the next area of the park.  Along the way we passed the Everest coaster which I get vertigo just looking at from the ground, but went into the gift shop called the Serka Zong Bazaar.

The first penny image I have always like since it first became available.  It’s a cute cartoon version of the Yeti you encounter on the Everest ride.  The other two designs are of Mountain Climber Mickey, and the Everest Coaster Logo.

It was about time for our Fastpass to the Safari jeep ride so we headed over there first.  Hanna actually stayed awake this year and enjoyed helping our guide point out the different animals along the way.  When the safari was over we headed to the Harambe Railway Station. 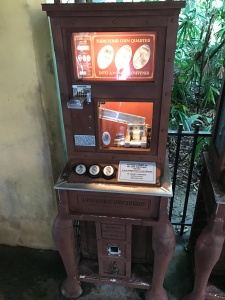 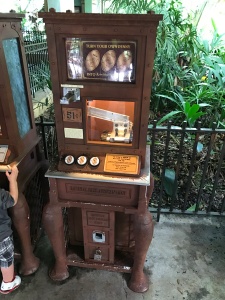 There are two machines located in the waiting area for the train.  Just be sure to not delay too long as you may miss the train if you don’t press the coins quick enough.  The machine on the left pressed quarters and had the 2016 Pluto design, Simba & Nala, and Shere Khan.  The second machine has pennies designs including Tarzan, Pumbaa, and Professor Archimedes from Tarzan.  I finished up just in time and jumped right on the train.  This takes you up to the Conservation Station which our kids had a great time at last year and we were anticipating the same.  After we got off the train there is a long walk to the Conservation Station but this is a great place to take a quick bathroom break and enjoy the air conditioning.

The above machine was new for 2016.  The images on these pennies were of Goofy with a Giraffe, Donald with a Map, and Timon & Pumbaa.  My daughter Hanna helped me press these coins and just as we were done she saw a familiar face make an appearance for a meet and greet so we headed right over and got in line.

Recently at home Hanna has become a fan of The Lion Guard which is a TV show based on a movie that is a new sequel to Lion King.  Yikes did you get all that?  Anyways my wife had to explain this to me as I couldn’t figure out how Hanna new who Rafiki was, but that explained it.  She really enjoyed meeting Rafiki and he was really great with her not rushing her on and spending quite a bit of time with her.  I’m sure it helped that there were only a few people in line at that time.  Back outside there is a petting zoo which we had to drag Hanna away from last year, but this year she petted a few sheep and goats but was almost dragging the adults out this time around.  Melody seemed to be enjoying herself, but that may be due to us escorting her around like royalty.

We made our way back to the train and once off were in the Africa area of the park.  We had a fastpass coming up but had time for a quick snack at the Tamu Tamu refreshments stand.  Hanna got an ice cream sundae and I opted for a Dole Whip with Coconut rum.  We ate our snacks as we wandered back over towards the Asia part of the park.

The Yak & Yeti is a restaurant we have eaten at a few times over the years.  We have always had enjoyable food and great service, but I do know some people who have said otherwise.  We enjoy it so we usually try to go each time we are at this park, but this year we had other lunch plans so I just ran inside to use the penny machine.

The designs on these pennies include the Himalaya Mountains, a Yak, Two Tibetan Mastiffs, and a Pagoda.  Our fastpass for a character meet and greet had started so we just took a quick trip over the bridge to Discovery Island and scanned our magic bands to enter the greeting area. 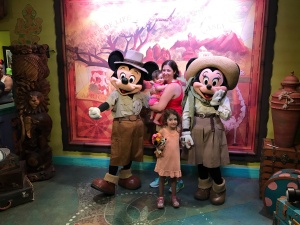 We still had to wait a few minutes in a queue but once we rounded the corner and Hanna saw who we were going to meeting she could hardly contain herself.  Mickey and Minnie in Safari outfits was a cute theme.  We got a lot of pictures and they definitely took their time interacting with both Hanna and Melody.  Hanna didn’t want to let Minnie’s hand go at the end but we promised to come back again another time.  It was getting closer to lunch time and we needed to start heading back to the parking lot so we could try to make it to our reservation.  We didn’t get to hit up all the attractions at the Animal Kingdom we wanted to but did get most of them done.  Thankfully once we were back in our car we didn’t have too far to go.  Check back to see where we went for lunch and if we run into any other penny machines (Hint: Absolutely).