Recently my father has been commuting from New Jersey to Washington, DC for work.  Instead of driving the whole time he’s been taking the train at the beginning of the week and coming home at the end for the weekends.  After his first week when he came home he was telling us all about it and mentioned how amazed he was by Union Station in DC.

A couple of years ago I had visited DC with my family for a long weekend vacation and we walked by Union Station but didn’t have time to go instead and look around.  My dad took some pictures and it really is a cool looking building. 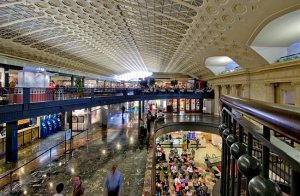 Then suddenly one day something struck me.  I remembered that the reason I had initially wanted to go inside Union Station was because they had some penny machines.  I quickly logged on to pennycollector.com and double checked to see if the machines were still available, and wouldn’t you know it they were still there.  I sent my dad off with some quarters and pennies and asked if he could stop by the Lower Level near the food court and press me a set.  Thankfully my dad doesn’t mind indulging me in my obsession and went out of his way to get them for me. 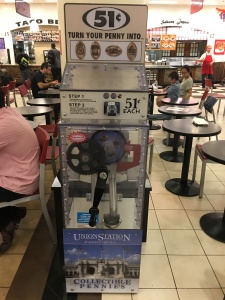 Both machines are located near each other but are in the food court area.  My dad said both machines were working fine, but that they were among some of the tables with people eating close by which made them a little awkward to use. 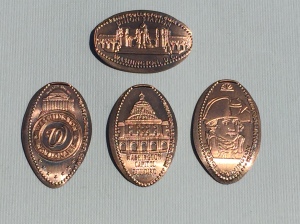 The four pennies at this first machine had images of the Union Station Building, The Washington Nationals MLB Baseball team Logo, The Capitol Building, and George Washington.  The second machine was located in a very similar location among the food court tables.  This one wasn’t as busy but I would assume it gets crazy at certain times of the day. 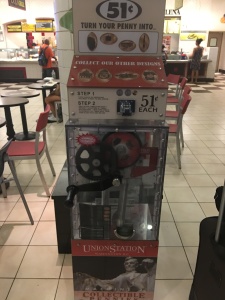 All the pennies rolled out nicely and the images were all Washington DC themed which was cool and were going to fill in the missing spots of my collection from a few years back. 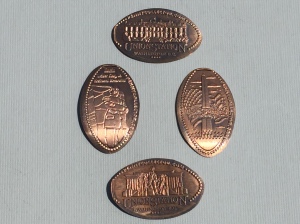 The coins at this location had images of some famous landmarks nearby.  The White House, Martin Luther King Jr National Memorial, the Washington Monument, and the Lincoln Memorial.  I thanked my dad for taking the time to get these for me.  It’s always fun to try to convince your family and friends to press some coins.  I’ve had some tell me it’s only for kids and they won’t do it (but I secretly think they enjoy it).  But most of the time they don’t mind and I always try to send them with everything they need to make it as easy as possible.