Out with the old Downtown Disney in Orlando, and in with the new revitalized Disney Springs.  When I had visited back in April much of this area was under construction and behind the magical walls forcing us to use our imagination as to what Disney was creating. 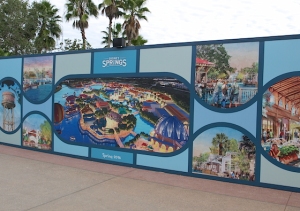 Now I believe the official grand opening isn’t until early 2016 but some of the new restaurants and shops have started to open.  I’ve got a few on my list for the next time we visit.  But in the meantime a new set of pressed pennies became available at the Marketplace Fun Finds.  This little store has seen quite a bit of action with their machines this year.  The original machine located here had four designs all that included “Downtown Disney”.  Well naturally with the name change to Disney Springs these old coins had to go.

Similar to the previous set all four of these designs says “Disney Springs” and included images of the Disney Springs Logo, Mickey Mouse, Minnie Mouse, and Goofy.  A friend of mine from Orlando was able to stop by and get these coins for me, but his phone was dead by the time he got to the store and wasn’t able to get a picture of the machine (I’m sending a phone car charger for Christmas).  But as always I’m very thankful he didn’t mind going out of his way to pick these up for me so I’ll forgive the dead battery (this time hint hint).

If you’re in the area make sure you stop by the new Disney Springs and see what’s new.  Check out Iron Chef Morimoto’s new restaurant or take an amphibious car for a tour of the lake from the new Boathouse restaurant.  Then before heading home wonder by the Marketplace Fun Finds and get a set of these coins, it’s the first new set for Disney Springs and hopefully won’t be the last.