On my recent day trip with my daughter Hanna to Philadelphia one of the few places we weren’t able to visit was the U.S. Mint.  Technically we did try to go inside but found that the mint did not have any visiting hours on Sundays.  There were a couple other places we wanted to check out that day but just weren’t able to fit it all in.  Luckily however only a couple of weeks later I had a day off from work and was in the area for another appoint.  But I figured this was my chance to get to these last places on my list because as you may expect there were penny machines to be found.

I parked my car near the Independence Visitors Center which I had reviewed in a previous post you can see here.  This was a relatively inexpensive parking lot for center city, and after a short walk past the National Constitution Center I arrived at the U.S. Mint facility located in Philadelphia. 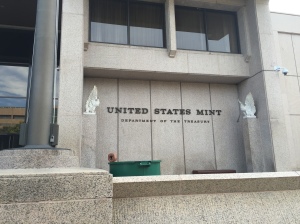 For those of you that may come here for a visit in the future please note that security is pretty tight here.  There is a scanning procedure much like you would find at the airport where you must empty your pockets of all metal objects and walk through a metal detector.  Also, this was a big one that I was informed of numerous times was that Photography and Videography is strictly prohibited.  I spoke to some people who had visited the mint in the past and said they had no issues taking pictures, so I don’t know if this is a new policy or not.  But the security guards did not look like they were in a forgiving mood when they were explaining this rules.  So being the good little visitor I am I didn’t take any pictures so this post will be pretty short.

The U.S. Mints largest facility is this one located in Philadelphia and this location was originally opened in 1968.  This is actually the fourth mint that has been located in Philadelphia.  The first was built in 1792 when Philly was still the U.S. Capital  and began operation in 1793 and was known as “Ye Olde Mint”. 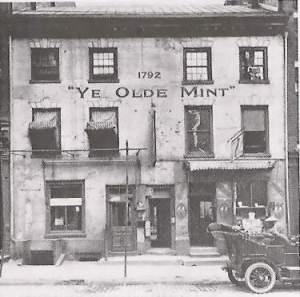 After submitting to a body cavity search (just kidding, only the metal detector I promise) the first stop was actually the gift shop.  For any coin collector this is really a great place and has a wide range of proof coins available, books, collecting supplies and other unique coin related souvenirs.  Just outside the gift shop was where the pressed penny machine was located. 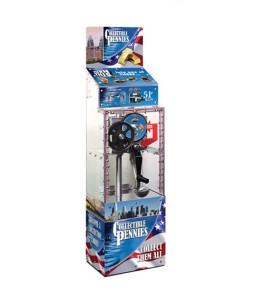 As I mentioned above I wasn’t able to take a picture of the machine myself.  I must say I really wanted to test my luck as I figured this machine didn’t have anything to do with the actual coin minting process which I assumed is what they are actually trying to protect.  But regardless my conscience got the best of me, and wasn’t up to spending the afternoon with Homeland Security just for taking a picture for the website.  Instead I have above the picture from pennycollector.com and I hope they don’t mind me using it so you can see what the machine looks like.  I must admit that the machine itself was really very nice. 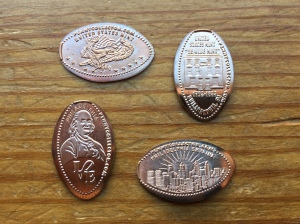 Each penny pressed very nicely with only a slight extra curve to each coin, but that was easily corrected once I got home.  The four images available were: a Majestic Eagle with wings spread, Ye Ole Mint 1792-1833, Ben Franklin with the LOVE sign, and the Philadelphia Skyline.

Just around the corner from the Penny machine was the escalator that started the self-guided tour through the mint.  There was no admission for the tour and took about 30-45 minutes depending on whether you read every piece of material posted along the way.  This was a really nice tour and had a ton of information that to be honest mostly went over my head.  I’m just a simple man who likes to look at nice shiny new coins, but understanding a little bit more about the entire process makes collecting them that much more special.

I will admit that after watching all the work that goes into making coins (including the penny) I kind of feel bad about squashing them.  But I just kept telling myself that they did have a penny pressing machine located in their gift shop so they must be okay with it.

Stop one was done but after a quick walk back to my car I was off.  Who knows, if I did risk taking the picture of the machine inside the mint I may have gotten a free ride to my next destination.