With the summer slowly passing us by before we know it the temperature will begin to drop and we’ll be stuck inside more often than we would like.  With the weekends we have left my family has been trying to do as much as we can.  Just this past weekend we visited for the first time ever the Staten Island Zoo.

This zoo was about an hour drive from our house in central jersey, straight up the turnpike and over the Goethals bridge.  This isn’t a large zoo but still has a wide variety of animals and things to do.  After arriving one of the first exhibits we came across were the river otters. 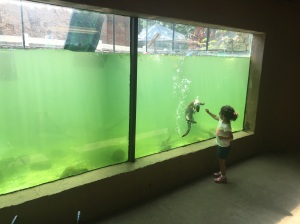 As you can see above Hanna had a great time playing with one of them through the glass.  Primarily the zoo has a central building with different wings that branch off in different directions.  Each wing houses a specific genre of animal for example the Reptile wing,  or the Tropical Forest wing.  While in the Tropical Forest wing I came across the first of two penny machines available at the zoo.

We visited the zoo right as it opened so there wasn’t a lot of traffic.  This area of the zoo was pretty empty so while I pressed the pennies I only had the nearby monkeys as an audience.  They didn’t look too impressed.

The three designs at this machine were: A Leopard, Mandrill and an Emu.  The coins pressed very nicely and the machine was in pretty good shape.  We continued walking around the zoo and Hanna saw her most favorite ride of all, a carousel.  So we took a quick break to go for a ride. 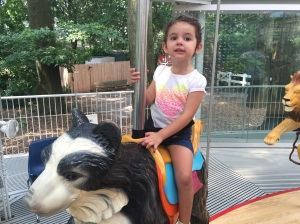 After taking a spin we headed to the last part of the zoo which was called the Kids Korral.  We had to first travel over a covered bridge which is also where we found the second penny machine.

I always come prepared with enough quarters and pennies (plus some extras just in case), but in case you need it there was a change machine located right nearby. 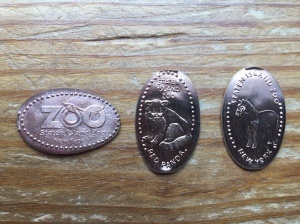 The three designs at this machine were: The Staten Island Zoo Logo, A Red Panda, and a Horse.  With the last set of pennies in hand we went to the Kids Zoo to feed and pet some barnyard animals before heading home.

If you’re looking for a zoo to spend an entire day at this wouldn’t be the place to go.  But it was nice for a few hours which is just enough time to see a decent selection of exotic animals and of course press some coins.