I’m baaack!  Sorry couldn’t help myself.  My big family vacation has come and gone and all I can say is wow we had an amazing time.  Our kids loved meeting all the characters and of course I was able to visit every penny machine I had on checklist for this trip.

My original plan was to post an update of what we had done each day, but unfortunately the wi-fi in our resort was terrible and made connecting to the internet almost impossible.  So here I am after a week-long visit to the happiest place on earth and I have so many notes and pictures I’m having a difficult time trying to figure out where to start.

Well I shouldn’t say that exactly, there was one very special machine I was able to access and knew I wanted to write about it immediately which I’m about to do.  Then as I go through all my paperwork I will make additional posts going over everything we did and the pennies I collected.

Now on to the main event.  This was a machine I had read about on PressCoins.com about 3 days before our trip.  The information on this machine was actually listed on April 1st and to be honest I thought it may have been an April Fools prank.  But none the less I updated my maps and to do list making sure I didn’t forgot to check it out just in case it actually was real…and to my surprise it was 100% reality.

On our 6th day in Orlando we had schedule to visit Hollywood Studios which is where this magical machine was supposed to be located.  We spent the entire day at this part but I’ll write about all of that at a later date.  For now I’ll jump right mid-morning after we had watched the Disney Junior Live On Stage show (which our kids went crazy for).  This show is located right near the  Magic of Disney Animation studio and a little outdoor store called In Character.

In the past this location has always had a penny machine that usually has 3 designs.  But the big news was that this location now had a first of its kind.  A new penny machine with 12 unique designs!!  WHAT!?!  Hopefully you can see how I could have convinced myself this was an April Fools joke but trust me it is real.  I saw it with my own eyes and pressed every coin it had available. 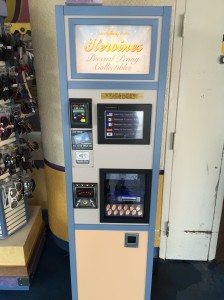 As you can see from the picture above this looks more like an ATM machine than a penny machine, and it really was simple to use.  There is a touch screen that you use first to select what language you would like to proceed with, then the machine asks you whether you want to press one design for $1.00 or all 12 for $10.00.  Now these are amounts are more than the usual $0.51 (two quarters and penny to press).  I can only assume this is to try to help recoup the cost of this advanced machine but who knows.  If you decide to press only one design the screen will then ask which of the 12 designs you would like to press.  I opted to press all 12 and made that option.  The machine then prompts for payment.  You can pay 1 of 3 ways.  Cash, Credit Card or Apple Pay (if you have an Apple iPhone this is their new touch to pay system).  Just to try something new I took out my phone and used the Apple Pay system which was really easy.  I just touched my phone to the payment processing part of the machine, my phone prompted me for my fingerprint as authorization and I was done.  The machine acknowledged my payment and started pressing the coins.

I took a close up picture (above) of the inner workings of the machine.  As you can see it has 3 designs across and 4 designs on each die making 12 in total.  The machine worked really quickly and I think it pressed multiple coins as once.  It took less than a minute for all 12 designs to drop out of the machine into the holding cup at the bottom.  The only issue I had with this machine was that I couldn’t use my own pennies.  The machine has a hopper inside filled with all different types of pennies (pre-1982, post 1982, clean, dirty, and everything in between).

As you can see from the pennies I received most are in pretty good shape but there are a couple that were not so great.  I was still happy with the overall process and the machine really was cool to watch it work.  There were people waiting to use it after me so I grabbed my coins and left.  Later in the day I went back to try to press some additional sets, but the machine was out of pennies and I was told by the store cast member that the attendant had been called but they didn’t know when it would be refilled.

I tried to give a close of the coins in the pictures above.  The entire set was listed as the Heroines set which included all the Disney princesses.  Snow White, Cinderella, Rapunzel, Ariel, Pocahontas, Mulan, Jasmine, Tiana, Belle, Aurora, Merida, and Alice.  Even though not all the pennies came out great when I got back home I was able to clean them and they brightened up nicely.  This is really a fantastic set and I hope that if this new machine is an experiment that it succeeds so we can look forward to more of its kind.

I will be trying to organize everything else I have from our trip and will post details of each day’s events.  I’m still trying to get back in the mindset that I’m no longer in Orland and am back home having to go to work and pay bills.  But the afterglow of our trip is still fresh and the smile I have on my face will be around for quite a while yet.  Happy collecting!