A really good friend of mine from work just this past week got back from a family vacation to Walt Disney World in Florida.  As I had previously posted about the craziness of my upcoming vacation, he had also been planning his trip for month.

He knew that I was an avid collector of pressed coins and asked (he probably wished he hadn’t) if there were any new designs he could pick up for me during his trip.  Wow, what an amazing friend.  I had a moral, do I take him up on the offer, or left him enjoy his vacation?  I chose the latter and explained I appreciated the offer but didn’t want to be responsible for his family wandering all over the parks looking for pennies.  But he didn’t take no for an answer and insisted that his kids would already been looking for the new Frozen pennies which have been recently been released and didn’t mind checking out the other new machines.

Now I was already feeling kind of guilt so I convinced myself that if I made it as easy for them to find the designs I needed that my conscience would be clear, and I wouldn’t be disturbing their vacation too much.  Heading over to my number 1 resource for WDW pressed coins I checked out http://www.PressCoins.com (Check it out they are awesome).  I always keep up with their blog which lists all new designs, retired machines and any changes to existing designs.  After reviewing all the new designs I had not yet acquired I started to put together the supplies. 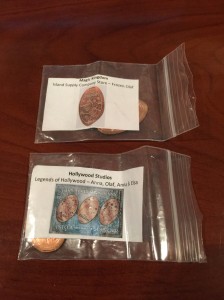 First I figured out which machines had new coins and created little print outs that listed the Park across the top, then the actual location within that park, and finally a picture from the website of the actual design I needed.  I then used the small jewelry bags I use for my own personal coin missions and loaded the print out and appropriate number of quarters and pennies inside.

There were only a few bags I had to put together and wanted to try and help with his own quest to find the Frozen designs for his kids.  Going back to the PressCoins.com website I found a list of all those designs and their exact locations.  I put together my own little checklist with the locations, design descriptions and even a little picture of each penny.  It came out really well and he thanked me for doing this as it helped them know exactly where to go once inside each park.

When he got back to work after his vacation it took all my power not to just run over to his office trying to get the coins.  Luckily I didn’t have to wait long as he quickly came over to give me the run down of his trip.  He handed over the bags with the freshly pressed pennies inside and I immediately examined each one.  I’m always amazed at how much detail the designers are able to put into each penny.

I had most of the new Frozen designs collected already, but they had released some new designs I had not been able to get previously.  The above designs were located in Hollywood Studios as the Legends of Hollywood store.  The designs included Olaf, Anna, Elza and Anna standing together. 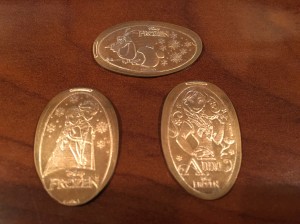 Next was a new design of Olaf from Frozen.  It was located in the Magic Kingdom at the Island Supply Store.  My friend said that the store was actually closed for renovations but a cast member saw them wandering aimlessly around and asked if they were looking for the penny machine.  When they said yes the cast member walked them over to the machine which was located by the Verandah Breezeway right beside the store.  Those cast members sure are friendly and helpful, always there when you need them. 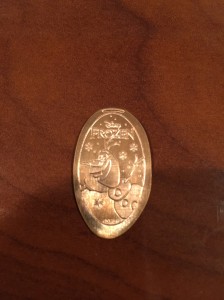 While at Epcot they were able to get another new design I had requested in the Mouse Gears store.  This design is of Kristoff also from Frozen.  I think they are up to about at least 15 Frozen designs by now.

I had send them with some additional coins for new designs located in Epcot near the Japan pavilion in the World’s Showcase.  Unfortunately they didn’t make it back to that area and were unable to obtain those designs.  I didn’t mind at all and was still overjoyed at what they did get for me.

There was one additional surprise they had in store for me.  One day while they were at Hollywood Studios they were waiting in line to meet the new characters from the animated movie Big Hero 6 which had just been released.  Once done with the character meet and greet they noticed a penny machine with 3 designs of each character from the movie.  These weren’t on my list since I didn’t even know they existed before they left, but they figured that since the movie had just come out these must be brand new.  They quickly scrambled some change together and pressed the coins for me.  The designs include Baymax, Hiro and Fred.

I couldn’t thank his family enough for getting all these designs for me.  I really appreciated it and hoped I hadn’t messed up their their already busy vacation schedule.  It’s always nice to have friends that even though they may not collect the coins themselves are more than happy to assist in collecting them for me.  They may be enabling the obsession, but I wouldn’t have it any other way.