With Baltimore behind us in the rear view mirror we had our sights set on Washington, DC.  We had been to Washington a few times in the past but always just to take in a Nationals baseball game, and then headed right back home.  This time we wanted to really check out the monuments, the history and of course the pennies.

For our first day in DC I had us scheduled to try to visit three different locations.  First up was the Smithsonian National Zoological Park home of the famous Giant Pandas.  One great thing I found out about DC was that most of the museums and attractions had free admission.  They do take donations at most of them, and the zoo even charged $2 for a map.

We had somehow managed to park in a lot right near the Panda area of the zoo.  After we had purchased our map we immediately came to panda information booth which had the first two penny machines.  The first machine has one design of a Giant Panda, and the second machines design was of a Tiger.  The information booth was closed but we came to the Panda gift shop and decided to check it out (never too early to shop for souvenirs).  Right inside the gift shop was the next penny machine that also had just one design of a panda holding a cub. 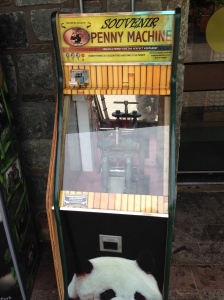 After prying some stuffed animals out of my daughters hands we headed out of the gift shop and towards the Giant Panda exhibit.  The zoo had just opened and yet this area was already swarming with visits.  It took us almost 20 minutes just to get through the crowd and catch a glimpse of the pandas.  At the bottom of the viewing area for the pandas there were two more machines.  First machine has one design of the panda cub Bao Bao, and the second machine had one design of Tai Shan another cub born in 2005.  As soon as I had these pressed we got the heck out of there and headed towards calmer areas of the zoo.

Next we wandered into the Visitor’s Center which has some details about conservation efforts at the zoo and as you would assume another gift shop.  There were two penny machines here but both were out-of-order.  The first machine had one design Mei Xiang and her Cub.  The second machine had three designs: A lion, a panda and an elephant.  I’ve been scouring eBay and my other penny collector friends but haven’t been able to get these designs from anyone yet.

After cooling off for a bit in the visitors center we continued following the path to the other exhibits along the way.  Eventually we came to my daughters favorite place which was the small mammal house.  For those afraid of mice, rat or other small animals this is not the place for you.  Hanna watched some Meerkats running around their area and thought it was the funniest thing.  We had to drag Hanna out of this place as she wanted to take everything home for a pet.  Across the path we found a refreshment stand and stopped by to get some snacks.  While waiting in line I noticed there was a penny machine to the right of the stand. 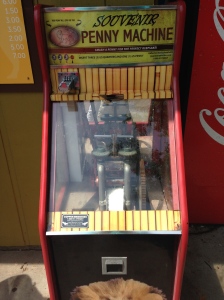 This machine has just one design as well of a lion but still came out great.  Machines like this can sometimes be hit or miss as you don’t get to supply your own penny.  The machine has pennies already inside and you get whichever one comes out.  Sometimes it can be a nice one and other times not.  Luckily for me all these machines were spitting out very nice finished products.

With our snacks completed and bodies rehydrated we walked down to the Great Apes exhibit.  This was a large building that you walked through and could see all the usual primates.  Some were more active than others, and it’s always nice to see the exhibits that have large areas for them to swing around and show off their strength and agility.  This is another location in the zoo that had a large crowd moving through very slowly.  We took our time but eventually needed to get away from the really slow-moving people.  Right before the exit there were two penny machines.  The first had one design of an Orangutan, but the second machine was broken.  It had 3 designs: A zebra, a panda and a tiger.

Our zoo trip was almost finished.  We slowly headed up hill back towards our parking spot.  We quickly stopped by Pachyderm Plaza and checked out the elephants.  They were outside roaming around which is always nice to see instead of them cooped up inside.  We said goodbye to the elephants and exited the zoo to the parking lot.  Got buckled in and started off to our next location.

No sooner had we started driving away from the zoo but Hanna fell asleep in the back seat.  The trip to our next location the National Cathedral only took a few minutes.  When we arrives it was really overwhelming to see the giant Cathedral in person.  You see it on TV a lot but don’t realize how huge it really is. 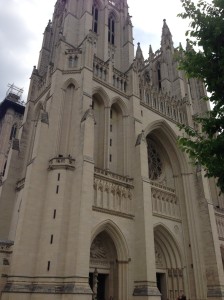 My wife offered to stay in the car while Hanna slept so I quickly jumped out and headed inside.  They were offering tours but I didn’t want to partake in this without my family so I just headed off to try to find the pennies.  As I entered the Cathedral I was informed the machine was in the gift shop.  Heading straight back towards the gift shop I wandered around checking out all the items for sale but didn’t see the machine anywhere.  I finally broke down and asked the teller  behind the counter and she mentioned that the machine had been moved to the second gift shop which was located in the basement.  Following her directions I headed down the narrow stairwell to the basement and came out into a smaller gift shop.  About halfway towards the back of the shop I found the machine and pressed the coins.

Not wanting to keep my family waiting I headed back out to the parking garage.  Hanna was still sleeping so I started the car and headed to our last location of the day.  By now the bright sunny day had turned dark and started to rain.  The first parking lot I could find near our last location I pulled into, and we made a made dash around the corner to the National Geographic Society.  There was an admission fee but was pretty reasonable.  The museum has lots of very interesting exhibits and great history on the magazine.  I remember as a kid using these magazines for any school project I had as they covered every subject imaginable.  Towards the back of the museum near the restrooms was their penny machine.  While my wife started wrapping Hanna up for the mad dash back to the card I pressed the pennies. 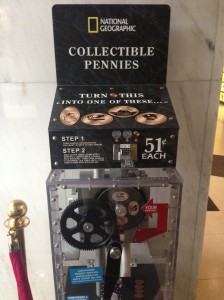 This machine worked perfectly and pressed 4 very nice designs.  A Shark, T-Rex Fossil, Mt. Everest and I believe a Sabre tooth tiger skull.  We walked back outside and to our dismay it was still raining.  Running back around the corner to the parking lot luckily our car was pretty close to entrance so we jumped in and headed back to our hotel for some much needed rest.

Did you keep up?  Hope so as Day 1 was just the beginning.  Wait until you see what we do tomorrow.  Many more places to see and pennies to press.