We are just a few days away from Christmas and as luck would have it my brand new set of pressed nickels showed up from Anaheim.  These annual tradition at the Disneyland and California Adventure have become something collectors look forward to each year.  Thankfully I had a friend in the area that was able to press me a set and ship them back so I could share them with everyone.

The back of these coins has a nice backstamp with Snowflakes and Disneyland Park printed in the middle. 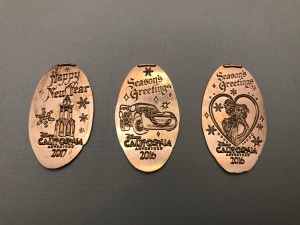 the backstamp for these coins is very similar to the other set.  Snowflakes surround the Disney California Adventure logo.

Another year has (almost) come and gone and these new Holiday coins were definitely worth the wait.  Nice detail, and being pressed on Nickels makes them just a little more unique.  These are only available for a limited time so make sure you pick up a set, and get ready for another great year of pressed coin collecting.

Have a very Merry Christmas, and Holiday season!!

One thought on “2016 Holiday Nickels – Disneyland and California Adventure”